Ai Tenchi Muyo! (愛・天地無用！) was created to commemorate the franchise's 20th anniversary, and to promote tourism for the city of Takahashi, Okayama.

The TV series began to air October 6th 2014, and consisted of 50 original five-minute episodes, as well as 10 recap episodes.

The series was directed by Tenchi Universe director Hiroshi Negishi, and the characters were designed by Suzuhito Yasuda.

Several of the original voice actors returned, with the exception that Yumi Takada did not continue to voice Ayeka due to her retirement from voice acting in 2009.

In 2018, FUNimation licensed the series for English release. Similar to the Japanese release, some of the original voice actors returned, including Ryoko's original English voice actress from the Pioneer/Geneon releases Petrea Burchard. The exceptions are Jennifer Darling and K.T. Vogt who voiced Ayeka and Washu in most of the previous releases excluding Tenchi Muyo! GXP. They were replaced by Cherami Leigh (who previously voiced War on Geminar's Wahanly Shume) and Karen Strassman respectively. It was released on July 10, 2018.

Characters and some details are very loosely inspired by the popular Japanese folktale Momotarō. In Momotarō, the titular "Peach Boy," gathers three friends, a dog, a pheasant, and a monkey, to fight and defeat the Oni plaguing their village. Okayama Prefecture, setting of the series, holds a claim over Momotarō as a folktale originating there, although many Japanese folklorists do no share this view.

The section that takes place in the far past also loosely depicts the tale of Kibitsuhiko no Mikoto, about a prince and his retainers (also modeled after a dog, bird, and monkey) defeating a demon that is later confined to the shrines of Okayama.

The early events of the plot are not presented in chronological order, rather, they are pieced out in occasional episodes within the first two-thirds of the series. The following summary reflects the general order of events, not the episode order.

Washu's experiments in dimensional research have caused a rip in the fabric of space-time and two Juraian travelers have fallen through and have been sent to Earth’s past and they crash their ship in the area that will become Okayama Prefecture.

Washu sends Tenchi Masaki to this past era with a smartphone that contains a program to send the two back to their original time once he has gathered the two together with their ship. As soon as he transports to the past, a child, Momo Kawanagare, falls out of a tree and lands on him, butt first. She turns out to be one of the travelers. As the ship was crashing, her guardian, Beni Kinojyou, transported Momo to the surface for her safety, as she attempted to keep the ship from being destroyed on impact. Using his smartphone as a tracking device, Tenchi takes Momo with him as they search for Beni and the ship.

They meet a party that are investigating a demon attack nearby. The three resemble three people from the future, Hachiko, Hana Saryu, and Touri Fueyama.  After determining Tenchi is not the demon, they accompany them while they follow their separate goals. The group encounter a bloodthirsty Ryoko Hakubi, who is revealed to be the rumored Demon. She does not recognize Tenchi and tries to attack him and the others. They receive aid from a dynamic and competent Galaxy Police Officer, Mihoshi Kuramitsu, in a battle suit, she doesn’t recognize Tenchi either. While they battle, a new rip in space-time opens and sucks the two of them in. How this connects to anything else is never explained. They are possibly versions from another dimension.

Tenchi and Momo find Beni, unconscious in her ship. Tenchi tells Momo everything is fine and presses the button that should send them all back to their proper time. Instead, a new dimensional rip opens. The accompanying tremors cause Tenchi to drop the phone into a crack in the ground. Momo and Tenchi are sucked through

Tenchi returns to Washu's lab and she tells him that the two girls have been randomly transported to a variety of points in time for short periods but have settled in their present time and she has detected that they are located at a nearby all-girls high-school, Junai Academy and have no memory of their past. Although not shown, it is implied that Beni also got sucked into a dimensional vortex and the ship also fell into a crevice, like the phone.

She tasks Tenchi with disguising himself as a student teacher and finding them. Ryoko is tasked with investigating the surrounding area (she never seems to do so) and Ayeka and Sasami are to support Tenchi. The four of them seem to be living in an Inn, that they may be running or are the only occupants of.  Mihoshi will be discovered later, Ryo-Ohki does not appear, except in the end credits of the final episode, Kiyone Makibi does not seem to exist in this version of the franchise.

In the first episode, Tenchi is lost in some random woods containing multiple signs warning of dangerous animals and falling rocks, looking for the school, when a teen-aged Momo falls out of the sky again, landing on top of him and ending up sitting on his face. She forgives him for seeing her panties. He is then assaulted by the other student members of the cast as they all pass, chasing after Momo.

At the school, Tenchi meets the domineering sultry teacher of the class he is teaching, Ukan Kurihara, who alternates between flirting with him and warning him to behave with the students. Their class contains all pertinent student characters of the story. He discovers that Momo is the president of the student council, and  Hachiko, Hana, and Touri are the council’s other members, who all adore and pledge their loving loyalty to Momo.

The council is hounded by the Science Club, who constantly request funding but also misappropriate their funds for a “treasure hunt” in a cavern under the old closed school building. Mihoshi is discovered to be working with them. She was actually tasked by the Galaxy Police with finding and capturing Washu, but as she knows that’s pointless, she decides searching for treasure is more fun.

Much of the plot involves the daily hijinks of their school life, accounting for the major activities of the Culture Fest, the Sports Fest, Tenchi working at the girl’s dorm, and a student council election. Tenchi is constantly treated as a pervert by everyone but Momo and has to go through multiple trials and tribulations. But eventually most of them come to have some affection or respect for him. Hachiko and Benri witness him activating his sword and using some of his power. But mostly he seems helpless to their constant abuse.

It is slowly revealed that Washu is using the Science Club to uncover the “treasure,” which is actually the Juraian spaceship trapped deep underground. She gifts them with a powerful robot named Goriki and some other inventions but mostly encourages them to find ways to do the excavation themselves. Late in the plot they discover Tenchi’s dropped phone as proof of the treasure and are able to open it to discover a saved beach picture of him and Sasami. Revealing to them that he must be central to the mysteries...and maybe a lolicon.

In the final act, a Galaxy Police commander with a grudge against Washu wants to arrest her for creating the space-time rift. His plan is to solve the problem by destroying the anomalies by bombing the school with a special weapon. Ukan is revealed to be a GP officer working under him (and Mihoshi below her), but also determined to protect her students. The commander has to give up when his bomb goes bad and threatens to make everything worse. He is forced to grant Washu a full pardon when it becomes evident that she’s the only one who can stop it.

Washu slows things down and eventually Ryoko and Tenchi gather Momo and Benri at the ship. But before Tenchi can send them home with a press of his smartphone command, Momo and Tenchi and are sucked into the dimensional rift again. This time, Tenchi and Momo chases after each other as she revisits her previous, less than happy, stops in the time stream. She ends up stopping for him, showing that maybe the problem was her hesitance to be separated from Tenchi. But she realizes she’s hurting her younger self and everyone else she has finally grown to care for. So they return to the ship and Washu’s program finally works, sending Momo and Benri back to their own time and original bodies.

Momo, at least, doesn’t have clear memories of what happened. The lives of the two of them seem to have been erased from the present, and it seems only those in Washu’s group, and probably the Galaxy Police, understand something happened. The final scenes show that the two of them settled on Earth at what would would become the Masaki shrine and that her ship's control device was kept in the shrine, just as Tenchi's sword was and there may be more story behind the past that Momo lived in and Tenchi's present. Mihoshi is also shown using divining rods to search for treasure at the shrine and says she thinks she is on to something, but gets distracted by lunch. 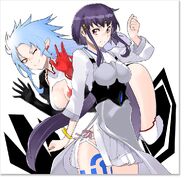 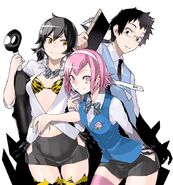 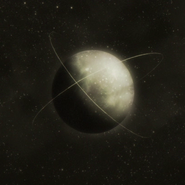