Airi Magma Masaki (柾木 アイリ, Masaki Airi) is a supporting character in Tenchi Muyo! Ryo-Ohki and a major character in its spinoff, Tenchi Muyo! GXP. She is the wife of Prince Yosho Masaki Jurai, the mother of Minaho Masaki and the deceased Kiyone Masaki, and is the maternal grandmother of the series protagonist Tenchi Masaki.

A native of the planet Airai, Airi's people worship the "three lives" - the Chousin - three goddesses who are the catalysts of the universe. Their planet led a small empire theocracy based on this religion, the largest religion in the galaxy. Airi's people despise the people of Jurai because they believe that they hold the goddess Tsunami selfishly to themselves, though this is not the case. Airi's father was at one time the ruler/priest of their people, and both are direct descendants of the founder of their culture.

She first met Yosho when the two of them studied together at the Galaxy Academy. They first met when he was a mature 12 years old and she was a childish 15. She was his tour guide and the two fell in love after spending a lot of time together. His relationship with Airi softened Yosho somewhat. Though it wasn't that extreme, the characteristics of his which made everyone in awe of him became less sharpened; the days living with Airi made him know the life of a normal boy. However, he spent 6 months out of the year back on Jurai and, much to Airi's chagrin, every time Yosho would return from Jurai, he would regress to the hardened prince she first met.

While she was at the Academy, the leaders of Airai were conspiring a plan to marry members of their families into House Amaki of the Juraian Royalty and she would be part of it. An adopted member of House Amaki, secretly a member of an Airai family, was to marry and solidify his royal status, and Airi was to marry another of the Airaian family to double the connection. The plan being to eventually rise to the throne and the Airaians could take hold of Tsunami.

Three years after meeting Yosho, she was ordered to return home to be in one of these marriages and forbidden to return to the Academy. She tried all she could to stop it, this included a desperate ploy to plead directly to the visiting Seto Kamiki Jurai. Although Seto turned down her public plea (as their countries were officially on poor terms), she secretly met with Airi and revealed the key to the plan being that an adopted Amaki prince was actually an Airaian- who was also an obnoxious student that Airi had antagonized. Seto told her she was determined to reveal the identity of the planted royal and ruin the plan but Airi also had to fight for what she wanted and against being a pawn in another of these scams.

Yosho returned from his six months on Jurai just before Airi was to return home and they spent a night alone together on his ship, Funaho.

Soon after arriving on Airai, it was discovered that she was pregnant with Yosho's child, at the same time that Seto was ruining their other plans, causing a number small scandals. Minaho was born into this difficult time. The problems were amplified a hundred fold by the serial killer Widow, who had the ability to amplify the unease of a tightly knit community, such as a devout religious group, into a violent psychosis. Mass suicides resulted and a rebellion and civil war followed that collapsed their society almost overnight. Airi's father and most of the ruling class were killed. Airi and Minaho were protected by Minaho's great aunt, Keira Magma, a nun and leader of the monastic order. Eventually, Airi and Minaho were given asylum at the Academy.

Even after the fall of the planet, Airaian religious adherents sent assassins after them, blaming the Magma family for the fall of the nation. It was probably around this time that Jurai acknowledged that Minaho was Yosho's daughter and let both of them use the powerful Masaki name as a deterrent. Airi continued her studies with the goal of becoming a powerful Philosopher, able to protect herself and her daughter. While struggling to prove her work (other students were unwilling to work with her), her mother performed experiments on Minaho that physically scarred her daughter. The work itself, however, led to success and Airi succeeded in her goals and was able to gain the desired power to effectively wipe out any remaining groups threatening them. If the experiments caused any friction between them, it has since been reconciled, at least somewhat. However, the relatively small age difference in such long-lived people means that their relationship is more like sisters than mother and daughter.

Years after Yosho ran away to Earth and after his first wife Kasumi died, he secretly contacted an old friend at the Galaxy Academy in order to arrange for some of his family to go into space. This resulted in him re-meeting Airi and being introduced to his daughter. Yosho traveled in secret to meet Airi and his daughter and the two fell back in love and officially married.

Over the years, they have occasionally lived with each other. They had a home at the Academy and Minaho lived on Earth for a "short time" of about 100 years. Some time afterward, Airi gave birth to their second daughter Kiyone. Though the two do not always live together, Airi and Yosho are still married and in love, as seen when they meet with each other in OVA 3. It is also known that Airi takes trips to the Earth, though how frequently is not known. Her marriage to Yosho is still a top-secret, as his survival has not been revealed publicly. Until MIhoshi's report on the Kagato battle was revealed to the Emperor, Seto was the only Jurai royal that knew of Yosho's survival. Seto, Azusa, and their agents in the Galaxy Federation were able to conceal the truth from the rest of Jurai and the galaxy so it is still only known to the extended Masaki family on Earth, the imperial Jurai Masakis, Seto and her close advisors, and Airi's circle of friends and confidantes.

Airi is currently the head of the Jurai sector office of the Galaxy Police and also works as the chairwoman for the Galaxy Police Academy. She works closely with the Academy's headmistress Mikami Kuramitsu and Lady Seto.

Airi meets her grandson Tenchi in OVA 3. However, anyone mentioning the fact that she is a grandmother better learn to run fast... she never likes to hear that she is a grandmother. Not even Tenchi dares to call her 'Grandma.' Conversely, he can't use any other overly informal name, lest he be affectionately smothered due to how he says it. In the end, as per suggestion, he simply sticks with the formal Ms. Airi (Airi-san).

Along with her granddaughter, Tennyo, she traveled to Earth to introduce Tenchi's arranged bride, Noike. As arranged by Lady Seto, Jurai's informal match-maker and adoptive mother of Noike. They both become enamored with Tenchi, constantly commenting on how cute he is. It is clear that she likes to keep in contact after this.

Airi is a master of the Neo-Academy style, a martial art often employed during discussions and negotiations between scientists and philosophers. The techniques mostly consist of slapping the offending party silly, as well as employing a cold, hard stare. Airi used this fighting style on Ryoko when she referred to Airi as 'a middle-aged floozie' and 'a crusty-old hag,' with great success.

She also has a joker attitude and loves to play practical jokes... whenever she can get away with it. She even cowrote the prank explanations of her daughter Kiyone's death told to Tenchi (on orders from Kiyone herself, the primary author). Obviously, Kiyone got much of her sense of humor from her mother. Her older daughter, Minaho, rarely displays anything like this trait.

Ever since taking advice from Seto on their first meeting, Airi has had a love for cooking, and could sometimes be found in one of the G.P. Academy's restaurants practicing her passion. Seina Yamada, the protagonist of GXP, fell for a prank by Amane, when they visited the restaurant and was told he needed to loudly call the hard-of-hearing cook 'Granny' When Seina found out, he was terrified (mostly because Airi was holding a chef's knife at the time). According to the advice of Seto, now repeated by Airi, "You can live anywhere happily if you can cook for yourself."

She often acts like a pest to Seina, but also values his contributions greatly, makes sure he is well protected and safe, and personally owes him a debt of gratitude for his invaluable role in the capture of Widow, who she had been hunting ever since the disaster on Airai.

Airi is shown to be a major prankster, very uninhibited, and not one to suffer fools easily. Traits inherited by her daughter, Kiyone.

In the novels, she is shown to be very perverted with a bit of a complex for very young men like Seina. She constantly sexually harasses Seina, even video chatting with Seina in the nude and later topless. It is even shown that she uses the NB she made for him to spy on him in his private moments.

It could be said this stems from the fact that her true love was 12 when she met him and 15 when they conceived a child (Seina's age at the beginning of the GXP novels); this would also explain why she acted suddenly overly-affectionate to Tenchi, when he addressed her as "Airi-Sama" (leading him to amend it to "Airi-San"), due to his resemblance to his grandfather at the same age. At one point, Washu even comes up with a special holiday for her (so she doesn't interfere with a vacation of Seina's) in which both she and Yosho have their ages regressed and spend time together. It is implied they have a very good time.

When Seina complains to Yosho about Airi's harassment, Yosho explains that he has no problem with it and if Seina wants to, he should take her up on her offers. 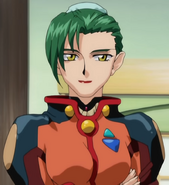