Amane Kaunaq (雨音・カウナック) is a main character in Tenchi Muyo! GXP. Formerly the galaxy's greatest supermodel, Amane is a Galaxy Police officer who accidentally recruits Seina Yamada into the GP, believing he was Tenchi Masaki. Over the course of the series, she becomes his instructor at the Galaxy Police Academy and later one of his crew members aboard his ship, the Kamidake. Uninhibited and direct with her actions, Amane makes no secret of her romantic feelings toward Seina and eventually marries him.

Before joining the Galaxy Police Amane Kaunaq had been considered the galaxy's greatest supermodel. She did not hate her life as a model but felt she had gotten the position through her connection to her father and felt she had to test herself by relying completely on her own abilities. Much to the chagrin of her father, she became very good at her job, although she never had any pirate encounters, which earned the nickname 'the Zero Goddess'.

She is a skilled pilot, excellent at combat, and a particularly skilled marksman, who can usually manually fire a ship's weapons with with extreme accuracy without manual or visual enhancement, even at far distances. While she is not very technically inclined, she is an excellent investigator with uncanny intuition.

Amane had been in line to gain a promotion to Detective 1st Class until she gave Seina Yamada the application to the Galaxy Police. She had arrived at Tenchi Masaki's house, possibly intending to recruit him (she had had a conversation about it with Mihoshi previously), but when she recklessly landed her spaceship, crashing into the lake, she almost drowned the nearby Seina, who got caught in its wave. While caring for him and giving him CPR (leaving a lipstick mark on his lip) she reasoned that he must be a Masaki, as he was at the house, and her intuition told her she should give him the pamphlet and application.

As it is normally prohibited to recruit citizens of underdeveloped planets to the Galaxy Police or even entering space, Amane's promotion was placed on-hold and she ended up assigned as an instructor in the G.P. Academy, along with Kiriko Masaki and her one-time childhood friend, Seiryo Tennan.

Despite her previous relationship with him as a child, Amane has a developed a deep hatred towards Seiryo due to his silly antics and overbearing tenacity, and since he tried to seduce her a few years back. Amane has demonstrated that she wants nothing to do with Seiryo, and has even beaten him up a few times when Seiryo tried to make a move on her or even annoyed her in the slightest.

After Seina received the body enhancing modifications he needed to keep up with the other students, Seina proceeded to move into Amane's private home, along with Kiriko and fellow GP employee, Erma (eventually revealed to be the spying space pirate Ryoko Balta). In the novels, Hakuren, Gyokuren, Karen, and Suiren also lived there, being forced to be Amane's live-in maids (and secret gaurds for Seina) by Lady Seto.

Amane's life would soon be revolving around Seina as the G.P. utilized the boy's fantastic amount of bad luck, which seems to attract space pirates, in a plan to bring peace throughout the galaxy. As to her feelings towards Seina, Amane is comparable to Ryoko Hakubi with Tenchi: she is unapologetically honest about her feelings and openly tries to flirt with Seina, much to Kiriko and Erma/Ryoko's chagrin and battles with them for his attention.

Amane is also the apple of her father's eye, as he desperately wants her to go back to her old life as the Kaunaq's Top Model, though she shows no desire to return to that life. They often argue, but it is shown that they do care for the other, although they don't show it as much directly to each other. Amane's mother, on the other hand, is quiet and does not express herself at all.

At the end of the series, she is happily included along with Kiriko, Ryoko, and Neju Na Melmas in a political marriage with Seina. The wedding is postponed however, when Hakuren's group kidnaps Seina and brings him to to help solve the pirate problem in their home territory, the Renza Federation. She and the others follow them and eventually join the efforts. At some point, She, the others, and Hakuren's group all manage to formally marry Seina.

At one point during the mission, Amane and Gyokuren travel back to Earth temporarily to join a discussion on the subject of sending Kenshi Masaki to Geminar.

When they return from the Renza mission, she and all of Seina's growing group are invited to build a house and make their permanent home (when not working) on Earth, on the land across the lake from Tenchi's house.

Amane's family happens to be the head of one of the premier fashion houses in the galaxy. Amane mostly entered the Galaxy Police to spite her tradition-bound father, who still kept in contact with his daughter despite her entry into the G.P.. Amane, later on, would briefly re-enter the modeling business when her family sponsored a G.P. fashion show. It was only after seeing Amane's skill and abilities during a live-fire demonstration of the latest G.P. battle gear that Amane's father conceded that his daughter was dedicated to her choice.

Amane makes friends easily and has many close relationships.

Amane's family is well acquainted with the powerful Kuramitsu family of planet Seniwa. Amane is friends with her fellow GP officer Mihoshi Kuramitsu, and trained her younger brother, Misao, and still refers to him as "rookie" and can easily embarrass him in front of his men. At one point in the novels, she is a bit hurt when Mihoshi and Misao's father, Nakita, acts cold to her (as he had to keep her distant while following orders he did not really agree with and would upset her).

One of her closest and oldest friends seems to be Raireza, a talented Philosopher who works under Airi. When contemplating whether or not to marry Seina, she sought her advice, talking with her well into the night (in the anime, it was Airi she talked with).

From her modelling career, she is particularly close with a fellow supermodel named Jun. She also knows and respects a prickly former rival model named Vega. 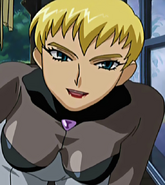 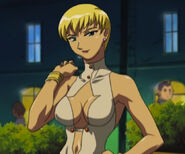 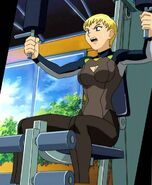 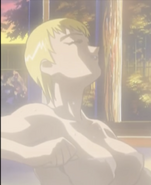 A What if of Amane Pregnant with Seina's Child.