While details of her character differ between the various series, Ayeka is typically shown as the beautiful princess of the planet Jurai who has fallen in love with the title character, Tenchi Masaki. Ayeka is portrayed as being well mannered, traditional, and aristocratic, but can also be snobbish (her proper accent is evidence of her aristocratic upbringing). She can also be very fierce when she feels that anyone or anything she cares for is in danger, such as Tenchi or her younger sister Sasami, of whom she is very protective.

Ayeka is a rival of Ryoko Hakubi for Tenchi's affections. Often the conflict between the two comes out of their decidedly different personalities and backgrounds, with Ryoko being more blunt, open and sexual in her attempts to gain Tenchi's love. The level of the rivalry can vary between being equatable to a pair of bickering siblings to an all-out feud. Ryoko's teasing and efforts often bring out some of Ayeka's worse aspects. However, there are times when Ayeka puts aside her rivalry such as when Tenchi is in danger.

Ayeka Masaki Jurai is the Princess of the Imperial Family of the planet Jurai. She is the eldest daughter of Emperor Azusa Masaki Jurai and the second of his two wives, Misaki.

Her arrival on Earth is due to her search for her missing half-brother and fiancé, Prince Yosho. When her search led her to Earth, she didn't find her brother, but did find Ryoko, the space pirate responsible for attacking Jurai and taking Yosho away 700 years previously.

Ayeka's apparent age is 17, but she is centuries older than that. She was approximately 17 upon leaving Jurai, but kept herself in a state of suspended animation until she arrived in Earth's atmosphere and detected the resurrection of Ryoko. Like the other members of Jurai's Royal Family, Ayeka has an extended life span and can live for centuries without aging past her prime unless she's cut off from the power of her Royal Tree, Ryu-Oh.

Because Ryoko nearly decimated Jurai and is the cause of Yosho's disappearance, at the start of Tenchi Muyo!, she hates everything about Ryoko and considers her a monster. After arriving on Earth, Ayeka proceeds to battle with Ryoko's ship Ryo-Ohki in her Royal Treeship, Ryu-Oh, and crash lands on Earth. During her capture of Ryoko and the Earth boy Tenchi Masaki who was in the space pirate's company, she discovers that the boy is able to control the Master Key - Yosho's sword, also called Tenchi, whose power can only be wielded by those of noble Juraian blood. Because her ship is destroyed in the battle, Ayeka is forced to stay with Tenchi, eventually becoming a part of the extended Masaki family.

Ayeka falls for Tenchi in episode 3, two weeks after being stuck on Earth. Ayeka begins noticing his similarities to Yosho and notices that Tenchi trains in the swordsmanship usually used by the swordsman on Jurai. She spends a day with him and her feelings for him culminate during a conversation that the two have while stuck in the rain and at the Royal Tree Funaho, whom Ayeka realizes belonged to Yosho.

During the battle with Kagato, Ayeka discovers that Tenchi's grandfather, Katsuhito Masaki is actually Yosho. Yosho gives Ayeka his blessing to take Tenchi as a betrothed instead of him because of his age (though in reality, his elderly appearance is only a disguise and he had never intended to marry Ayeka because of reasons that include the fact that he only loves her as a sister).

Ayeka is shy, demure, and proper, but can become just as aggressive and violent as Ryoko. When her temper is roused, Ayeka becomes very loud and boisterous, without regard for current conditions. However, her fights with Ryoko have seemed to diminish over time. Ayeka can also be very snobbish. She, like any other young woman, is particularly vain and tends to boast about her looks during her spats with Ryoko.  Originally, she was a very honest, straight, outgoing, and affectionate tomboy like her mother Misaki. But fortunately or unfortunately, she had another mother, her father's first wife Funaho, who was calm, modest, elegant, gentle and had some special aura that could make others feel peaceful; young Ayeka idolized Funaho so she began copying her appearance and behavior. it's revealed in the True Tenchi novel "Yosho," that Ayeka's hair color and style were originally like her mother's and Sasami's, but she underwent gene manipulation so she would be similar in appearance to Funaho, an action meant to impress Yosho who considered his mother the ideal woman, as well as to share the same color as her father to exert power. One of the reasons why she loved Yosho might have been because he was Funaho's son.

Of course, she loves Misaki, but it was (and has been) taboo for her to hear that she's similar to her mother in personality. Every time she sees her mother's usual behavior, she feels somewhat bitter because she knows it to be a part of who she really is so she tries to suppress her natural self and play the role of the perfect princess.

Unfortunately, Ayeka's Ryu-Oh is damaged in a crash landing on Earth after an escape attempt by Ryoko. It did begin to regenerate, but it was blown away by Kagato's ship, Sōja. However, due to help from the goddess and progenitor of the Juraian Royal Trees, Tsunami, Ayeka received a seed from her deceased tree that will eventually grow into a new Ryu-Oh.

Ryu-Oh has the ability to produce three Light Hawk Wings, the greatest force in the universe usually generated by the Royal Treeships. Ayeka had bonded with the tree shortly before Ryoko and Ryo-Ohki attacked the Juraian castle, Tenju. Despite warnings made by the castle's attendants, 14-year-old Ayeka launched the young, underdeveloped ship to fend off Ryoko's attacks. Ayeka was also able to use Ryu-Oh's Light Hawk Wings to attack, though their purpose is for defense, and was able to hit Ryo-Ohki, which no other ship could do. According to the True Tenchi Muyo! novels, "Ayeka had just finished the selection ceremony and didn't have the key to help her connect with Ryu-Oh. Also, her ship had just equipped, thus was not fully synchronized with the external armor, so Ayeka and Ryu-Oh could not fully control the power of the Royal Tree. But Ayeka did not give up and continued the battle. However, she could not help the situation just by defending herself. It was only by virtue of the second generation Royal Tree's power that she could hold off the attack, and it was also because Ryo-Ohki and Ryoko were just teasing her and not fighting with full power."

Although Ayeka does not have the raw power of Ryoko or Tenchi, who is revealed to be the most powerful being in the universe, she still wields the power of the Jurai Royal Family and was trained in martial arts by her mother, who is considered the most skilled martial artist of all of Jurai. She can hold her own against enemies as seen during the battle with the powerful Kagato, and when she easily gets the upper hand on a well-trained Galaxy Police officer during OVA 3. She possesses superhuman strength, she can fly, and generate shields that are able stop nearly any attack and have some sort of telekinetic ability to repel enemies. Ayeka can also call upon powerful force fields that can keep even Ryo-Ohki and Kagato prisoner while also having the ability to electrocute. In OVA 4, Tenchi admits to sparring with her and being completely overwhelmed by her fighting skills.

In OVA 5, Tenchi and Ayeka take their relationship to the next level, and in Episode 5 announce their plans (along with the other girls) to get married after Yosho's return to Jurai. In episode 6, Ayeka is pregnant with their child (her first, Tenchi's second.)

The romanization of her name in the Pioneer/Geneon English subtitles is "Ayeka" instead of "Aeka" to clarify its pronunciation for Western viewers (ah-eh-ka). Her name is believed to be derived from aekanaru, meaning "frail" or "delicate," reflecting her usual outward demeanor. An old reading of aeka is "willowy", or "requiring the assistance of a man." The tree is referenced in the "soul of the ship," and further connects to "spring" and the "awakening of sexual desire." In Japanese mythology, the willow tree is known as a "demon repeller," which represents her relationship with Ryoko. 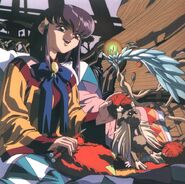 Ayeka in her battlesuit 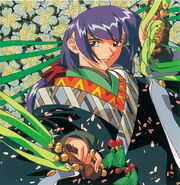 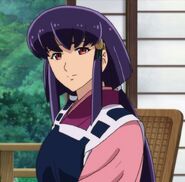