Fuku (福, Fuku) is a character from the OVA spinoff Tenchi Muyo! GXP. "Fuku," was created by the greatest scientist in the universe, Washu Hakubi, and is the younger sister of the legendary cabbit/spaceship Ryo-Ohki.

Fuku first appeared in the episode "Z" in Tenchi OVA 3, visiting from the future to help ensure Amane would be in position to give Seina the pamphlet to join the GXP, though she wouldn't be even born/reincarnated until the Tenchi GXP episode "Neju Who?" She is a "cabbit," a small, part rabbit, part cat-like creature that hatched from an egg in the Kamidake II, the ship of GXP main protagonist, Seina and was given her name by Seina himself for the Japanese name for good luck, the complete opposite of Seina himself who is notorious around the galaxy for his bad luck. She is the younger sister of Ryo-Ohki, the extremely powerful cabbit/spacecraft of space pirate Ryoko created by Washu. Fuku has a great love for her creator/mother, Washu and has fond feelings for her big sister.

Washu created Fuku on the request of Tenchi, who was worried about the safety of his extremely unlucky friend Seina in the Galaxy Police. For various reasons, they used the soul of a recently executed mass murderer, known only as Widow, to create Fuku, though they erased all of her memories of her previous incarnation. However, she seems to have retained at least some of her skill in a subconcious state, as she is able to detect assassin bioroids when the crew of the Kamidake II pick up what appears to be survivors of a pirate attack.

One thing to note, is that the cabbit appearance of Ryo-Ohki resulted from Ryoko integrating the remains of Chibi, a little cat she had been keeping alive for Tenchi before he released her at the beginning of OVA 1. So while Ryo-Ohki's appearance is a side-effect of the integration, Fuku's was modeled after the integrated Ryo-Ohki.

Like Ryo-Ohki, she is the biological computer unit and, at first, the principle power source of the Kamidake II, which can fluctuate depending upon the mood of Fuku. Her appearance is identical to her sister's when she first hatched in the 3rd episode of the OVA. One characteristic that distinguishes her from Ryo-Ohki is the small bell on her neck which she received from Seina. She later shared responsibility for the Kamidake when Kiriko Masaki Jurai was bonded to second-generation Royal Tree, Miyuki, which gave Fuku help in powering the ship to battle against the Unko of the Good Luck Fleet. She also shares her big sister's love of carrots. Washu also explained to

Seina, that with proper raising and nurture, Fuku will be able to transform into a humanoid form like Ryo-Ohki can.

Fuku, as well as the Kamidake II, were also briefly taken away by a corrupt faction of the Galaxy Army that was aiding Shank in order to analyze her for their own personal desires and placed her into a stasis field. The G.A. scientists attempted to clone Fuku, but could only produce five imperfect clones. Eventually, Seina was able to rescue Fuku, as well as the clones. As for what happened to the clones are unknown.

Towards the end of the series, Seina's crew and the girls who vy for his affection, Amane, Ryoko, Neju, and Kiriko were later engaged to wed Seina in a political marriage. And as the Kamidake II now falls completely under Seina's control, with Fuku as a part of the ship, Seina in a way was marrying Fuku as well.

Fuku also made a brief appearance in Tenchi Muyo! Ryo-Ohki,, when at the end of the final episode of OVA 3, she travels back to that time period from an unspecified point in the future, alters the message to Mihoshi Kuramitsu's family (that antagonist Z had originally altered in the original timeline) in order to put the timeline in correct order, so that she would eventually meet Seina. Fuku was accompanied by a slightly older version of Noike, who also didn't want the timeline adversely affected so that she would be able to meet Tenchi.

Fuku's relationship with Seina is very similar to Ryo-Ohki's relationship with Tenchi . Fuku is deeply devoted to Seina, and that devotion is clearly demonstrated by her willingness to help him, despite the fact that sometimes she can be easily frightened. Her personality is also very similar to Ryo-Ohki in the sense that she is very sensitive and desires to be loved and showed affection by others; and when she is sad and lonely, she easily becomes depressed. Seina was also the first one to truly care for her when he demonstrated his faith in her.

Fuku also has a good relationship with Neju Na Melmas and hangs around with her when she is not with Seina, which is similar to Ryo-Ohki's relationship with Princess Sasami in the original series. Eventually the same relationship is seen with Acha, the Wau child that joins the group after Seina claims Zinv from her village. Acha really has no one her age in the group and Fuku becomes a great comfort to her.

As a result of her relationship with Seina, Fuku has demonstrated to be very powerful whenever Seina or anyone else is in danger, which has lead to her mood and feelings supplying immense and powerful energy to the Kamidake II whenever its crew were in danger.

Fuku was made with a different concept than Ryo-Ohki. Ryo-Ohki was made to self-evolve at the behest of its partner, Ryoko, and its greatest power comes from Ryoko's gems. Fuku needs to grow and mature but on a stand-alone basis (without any gems), her performance, fighting ability, and self-evolution are superior to Ryo-Ohki's. She was also specifically made to be able to merge with a Juraian Treeship.

In GXP episode 17, Washu revealed that, like Ryo-Ohki, Fuku can shapeshift into a humanoid form but she has to want to. Washu also tells Seina that she needs nurturing before she can perform the task. It is eventually revealed that her form depends on her experiences. As Seina's ship, traveling the galaxy, being in multiple battles, and meeting such a wide array of people has made Fuku mature quickly, seemingly faster than Ryo-Ohki (although Ryo-Ohki also matured quickly when she became Kenshi's companion).

Additionally, Fuku, along with Noike, appeared in the final scene of Episode 6 of the third Tenchi Muyo! OVA, making sure the letter to Mihoshi's family (originally altered by Z) got through, with Fuku doing the typing.

It is reveled to be the reincarnation of Yayoi Schwael in the Paradise War novels. 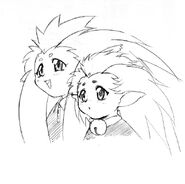 yo-Ohki and Fuku in humanoid form 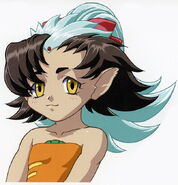 Widow, whose astral is the base of Fuku
Community content is available under CC-BY-SA unless otherwise noted.
Advertisement