Human and Juraian (through distant ancestry)

Funaho Masaki Jurai (柾木 船穂 樹雷, Masaki Funaho Jurai) is an empress of the planet Jurai. She is canon to the official continuity as she appears in the Tenchi Muyo! Ryo-Ohki OVAs, also appearing in its television spinoff Tenchi Muyo! GXP and in the True Tenchi Muyo! novels. She also appears in the Okuda's manga No Need For Tenchi, although it's a non-canon continuation of the OVAs. Being a member of the Royal Family of Jurai, she possess great power and authority. She is the great-grandmother of main protagonist Tenchi Masaki.

Funaho is Emperor Azusa Masaki Jurai's first wife, and the mother of Prince Yosho. She serves as Jurai's Minister of Intelligence and acts as Head of House Masaki as her husband sits on the throne of all of Jurai. She is a distant descendant of Masaki, the sister of the first emperor of Jurai, but considers herself to be an earthling since she was born on Earth.

Years ago, Emperor Azusa and his Royal Tree, Kirito endured a battle with the ruthless Kagato and the battleship Ryo-Ohki. Defeated, Kirito was then transported away and put near Earth by the goddess Tsunami. While there in Japan, Azusa saves a young Funaho from bandits and she helps him recoup from his injuries received from Kagato. Azusa would later court Funaho and take her back to Jurai to be his first wife.

Azusa took Funaho to be his bride despite the prejudice that came with mixed blood marriages at that time on Jurai as well as his arranged marriage with the daughter of the Lady Seto, the Devil Princess of Jurai -- Misaki Kamiki Jurai. However, most of the problems seem to have been stirred up because of a political opponent of Azusa's, Shuzan Amaki, head of House Amaki, who hoped to depose Azusa and take the throne himself.

Funaho would have been satisfied being the Second Empress, but due to Azusa insisting she be First Empress the stress wore on her early on. She was often homesick and brought to sadness because she was a stranger in a strange world. That changed when she met a young Misaki and the two became fast friends, even referring to each other as sisters, and finally wives married to the same husband. Funaho is bonded to the second-generation Royal Tree, Mizuho. A twin of 2nd Empress Misaki Jurai's Karin, the ships have the ability to join together as well and become more powerful than maybe even a first-generation tree. The relationship being a parallel to Funaho and Misaki, married to the same husband and powerful in their own right but much more powerful together.

Shuzan's activitities made it seem like those on Jurai (particularly the nobility) that despised and criticized her because she is an Earthling were a powerful faction. Even as Funaho gave birth to Azusa's son, who became first heir to throne, Prince Yosho, his persecution of her continued.

After Yosho left Jurai while defending Jurai from Ryoko, a meeting of the heads of state was held where Shuzan made disparaging remarks about Yosho. An upset Funaho began drinking, leading her to return his insults (warranted, as he himself used weak excuses to not join the battle at all). Shuzan, believing her to be weak, wished for this behavior and seemingly forced her to accept a duel with him. Unbeknownst to the rest of Jurai, Funaho had become one of the few who can spar with Misaki (Jurai's greatest martial artist), though only when using a staff, making her one of the fiercest combatants on Jurai. She then displayed her fierce skills with the staff against Shuzan and thrashed him repeatedly as she kept drinking and becoming more and more belligerent. She also took on and defeated Utsutsumi Kamiki Jurai (jealous that Funaho took the "first empress" position from his daughter, Misaki) and any others that tried to face her. Jurai, a society still greatly influenced by its pirate heritage, sees battle prowess as one of the best indicators of a person's worth, so, once her skill and fierce battle persona were so widely displayed, she became even more revered and no one ever challenged her fitness as First Empress again. An utterly defeated Shuzan also gave up his position as head of House Amaki to his son and stopped his scheming (and also became quite fat). Also thanks to the fight, no one dares to let Funaho get drunk again.

Funaho would become the head of Jurai's Intelligence and was one of the first to learn of Tenchi's defeat of Kagato and was the first of the family to arrive on Earth afterwards. When she arrives at the Masaki Home on Earth, she sees right through Yosho's elderly "Katsuhito" disguise. Her main reason for coming to Earth, in OVA Episode 13, other than to see Yosho, and to check up on her step-daughters, Ayeka and Sasami, was to ask Professor Washu if she would assist Jurai by mass producing ships like Ryo-Ohki for their defenses. However, Washu already knew about this reason and refused because, to Washu, not only would she not betray Tenchi's trust by accepting the offer, she also felt there should only be one Ryo-Ohki. Washu then assured a worried Funaho that she won't mass produce similar ships for any of Jurai's enemies, because she has no interest in helping anyone. Washu does eventually relent slightly. First, she creates a "sister" of Ryo-Ohki named Fuku, but she has significant differences and this was done as a personal favor for Tenchi, as a gift for Seina Yamada. Second, she also eventually tunes the Juraian Treeships, Honaka and Kyoko, who both have Masu-powered interfaces. 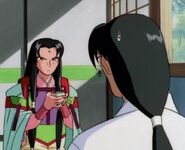 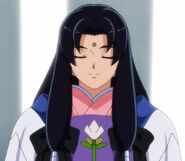 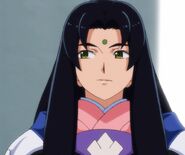