Crew Member of the Kamidake

Kiriko is a childhood friend of the main protagonist Seina Yamada, and would often be tending to the many injuries that Seina would suffer from his bad luck. She cares for Seina deeply and would fight to protect him from further harm. Even her younger brother, Kai Masaki, would help out Seina in repairing (or otherwise constructing from new) the bicycles that would be wrecked because of Seina’s bad luck.

A secret from the wider world is that Kiriko, like all members of the Masaki family, is a distant member of Juraian Royalty, a descendant of First Prince Yosho, known on Earth as Katsuhito Masaki (Tenchi Masaki's Grandfather), and his wife Kasumi. Masaki children are not normally told of their alien heritage until they come of age but in the second GXP novel it is explained that Kiriko learned about her Juraian heritage earlier than usual by accident as a child. She overheard a visiting Minaho discussing a biological weapon released on Earth by space pirates, a symbiote that attaches itself to a host and passes onto new hosts, killing the previous one. Convinced that Seina's bad luck would attract such a monster, she rushes to his house to protect him. In an attempt to save him, she struggles with the symbiote and it attaches itself to her, infecting and painfully mutating her arm, taunting her from inside her head. Minaho arrives and completely severs Kiriko's arm, apparently killing it. But, as an adult, she still ponders how she can occasionally still hear her regrown arm speak to her. This may partially explain her later bouts of uncontrollable rage.

After graduating from school, Kiriko went into the GP Academy, becoming an officer. She would only return to visit her family once every few months. From comments made, Kiriko had a very distinguished career. It once has being said, by a GXP captain and former mentor of hers, that if she wanted to, she could be the captain of a ship herself. She would merely need to make the request.

It is mentioned in the novels that Kiriko stayed in an area of accelerated time for ten years during her training.

For a time, because of her familial status, Kiriko was one of the ladies-in-waiting of Seto Kamiki Jurai, the infamous "Devil Princess of Jurai." That connection helped Kiriko gain a position with the Galaxy Police's immigration department, where she worked when she wasn’t on Earth.

Kiriko is deeply in love with Seina, although she wouldn't admit it early in the series. Having grown up with Seina, she tried to convince everyone (including herself) that she loved him like a brother, though this was not true.

She met Seina through her brother Kai, who befriended Seina when the two first went to school. Kai's Juraian ancestry was suggested as helping them deal with Seina's bad luck. Being older, Kiriko would look after her brother and Seina. Even taking baths with them (a common practice in Japan, to make sure the younger children wouldn't hurt themselves in the bath.) A major turning point in their relationship seemed to be when, at some point, Seina's parents met Kiriko and Kai's, and his mother broke down about the fact that she was so happy that Seina actually had friends whom his bad luck had not driven away. It then became Kiriko's mission to help and protect Seina. The light novels establish this as happening shortly after they first meet, when Seina's parents bring him to visit Kai's home for the first time.

Alluded-to in the Anime, and elaborated-upon in the light novels, it is revealed that, while Kiriko does deeply care for Seina, she eventually left Earth in part to escape his bad luck, something which she felt very ashamed about.

It was while Kiriko was working in the G.P.'s immigration department that she found out that Seina had enrolled in the Galaxy Police. Immediately, she pleaded to the boy to return to Earth, without success. Soon afterward, she was assigned to the G.P. Academy, along with 2nd class Detective Amane Kaunaq, who is responsible for bringing Seina into space. During Seina's training, she had moved into Amane's house at the Academy along with Erma, although it was more to keep an eye on Amane and keep her from making a move on Seina.

It was later on in the series that Kiriko began to feel inadequate compared to the other women in Seina's life – The supermodel Amane, noble space pirate Ryoko Balta, and more recently, high priestess Neju Na Melmas. It was after an experiment using Seto's ship Mikagami that her life would be changed. In a ceremony witnessed by Seto's husband Utsutsumi and Juraian Emperor Azusa, Kiriko was bonded to a second-generation Royal Tree, thus giving her the name Kiriko Masaki Jurai. The tree's name is Mizuki, and now aids the cabbit Fuku in powering the Kamidake II, the ship she commands with Seina and Amane.

Like Amane, Ryoko, and Neju, Kiriko was overjoyed to be engaged to wed Seina in a political marriage. However, before the ceremony could begin, Seto's ladies-in-waiting, who were actually agents of the Renza Federation seeking to use Seina's abilities to rid their home from marauding pirates, kidnapped Seina into their small ship and began to do sexual things to him in a public broadcast to ensure their non-Galactic Union organization's survival. As a result, the four are apparently included in the marriage, or at least the crew of the Kamidake II.

It is mentioned in the novels that because of the interruption, the wedding wasn't completed, so the groups are not (as of yet) officially married.

In OVA 5, it is mentioned that Kiriko joined an adventurer's guild in the Renza Federation, although the novels have yet to cover this time period, so details are missing. In the published novels, Seina is trapped on a magical planet and is training to be a member of an adventurer's guild. Presumably, Kiriko joins him at some point.

Also, when asked by Seto, Kiriko and the girls indicate that they have a normal sex life with Seina by this time.

aka 'Charon Wolf'
As explained in seasons 4 and 5 of Tenchi Muyo! Ryo-Ohki, Washu had planned to give Kenshi Masaki a Sekijin that she was designing for the time he went to Geminar in the future, but Rea completely refused the idea. Washu went ahead and built it anyway. In the GXP Novels, when Kiriko and crew followed Hakuren's group to Renza to fight their pirates, Washu decided to give her created mecha to Kiriko instead (or, at-least, loan it to her), to aid their efforts (and just because she wanted to see what her creation could do).

When Seina and Zinv disappear after an impromptu battle with HIMC, representatives of the Renza Federation used the battle in a desperate and flimsy arguement that he and Kiriko's group were overstepping their bounds and that Zinv should be turned over to them. An infuriated Kiriko challenged them to solve the quarrel in a duel between her and anyone that would take her on. In the resulting battle, she made quick work of 4 Renzan princes piloting their best available "Heavenly Knights" with their rarest and most powerful weaponry. Kiriko decided she needed to thoroughly humiliate them, so she stole their weapons before decapitating the knights. She then taunted the supporting cavalry. In the end, she had destroyed 12 "Heavenly Knights" (The highest class of battle mecha they use) and 16 "Aquius Knights" (The level below). With this count, she instantly became one of the most deadly knights in the history of Renza mecha battles. (There were no actual fatalities, she destroyed the mecha and left the pilots in their useless cores).

The history of the rest of her battles there have yet to be recounted.

A version of Yomotsuookami then shows up in the 5th season Tenchi Muyo! Ryo-Ohki episode, "Paradise Paradigm." This version is completely transformed from its initial depiction, seemingly having integrated the features and weaponry of the other knights it has defeated. Only Tennyo is shown as being a passenger at this time. It is unknown if she piloted it (which seems unlikely), Kiriko is not shown in the episode, but Karen is, and would be familiar with it.

A fan translation interprets the name as "Charon Wolf" with this explanation:
"Yomo" represents "Hades." Literally, it's the sulfur river of Hades. "Tsu," in this incident, translates as "ferry."  "Ookami translates as "wolf" but it is clearly a pun on "okami" (great deity). It's clearly referring to Charon, the ferry kami of hades, so, to localize, the fan translator uses "Charon Wolf" instead of its cumbersome long name.' The main problem is that the text seems to use the unwieldy name as a joke in itself, but one English speakers do not understand.

As a G.P. officer, Kiriko has access to much of the G.P.'s standard complement of weapons and training in their use, as well as her Jurai strength. In one episode, she demonstrated the use of one of these – a bodysuit that featured cloaking technology, which enabled her to attack with complete surprise. Also in the heat of battle, Kiriko tends to concentrate solely on the battle and not on the environment around her – which was why when she approached Tarant Shank – covered in the blood of her previous opponents - she became surprised and worried to find that Seina had seen her in this state. 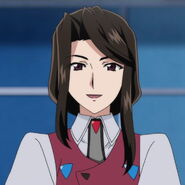 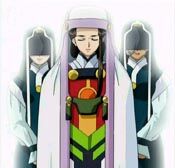 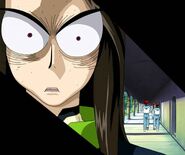 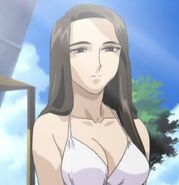 Add a photo to this gallery
Retrieved from "https://tenchi.fandom.com/wiki/Kiriko_Masaki?oldid=23605"
Community content is available under CC-BY-SA unless otherwise noted.