Kiyone Makibi (真備 清音, Makibi Kiyone) is a Galaxy Police detective of the Tenchi Muyo! series. She is an original creation of first OVA series' co-scriptwriter Naoko Hasegawa, appearing in most Tenchi Muyo! canons with the exception of the official OVA canon accepted by the series creator Masaki Kajishima. She did not appear in Tenchi Muyo! GXP.

Kiyone Makibi is a first class Galaxy Police detective who graduated with the second highest marks in her year, and because of her athletic and analytical skill, commitment to police work, and responsible nature was deemed the cream of the GP crop and among the best of the younger generation of Galaxy Police.

Saddled with the bumbling Mihoshi as a partner, Kiyone's career suffered; she has become somewhat bitter and depressed with her misfortune, hoping that she can earn a promotion and transfer away from Mihoshi, which would ensure much better prospects for the future. But despite the trouble Mihoshi has brought her, Kiyone holds some hidden fondness for her partner, to such a degree that, when she is finally promoted, she continues to stand by her.

Kiyone is an exceptional detective with great sharpshooting skills with a GP Blaster, and is capable of using any of the GP-issue equipment properly. She also maintains a fondness towards karaoke.

Kiyone is not as frequently depicted being infatuated with Tenchi as the other girls are, but expresses concern and care for him nonetheless. If she does have feelings for him, her career and watching over Mihoshi makes her unable to act upon them.

Kiyone made her debut in the first of Naoko Hasegawa's non-canon spinoff novels, One Visitor After Another: Hexagram Of Love (SenKyaku BanRai: Ai no Hexagram), released in May 1993. The best known of these books would be Manatsu no Eve, adapted into a film by AIC in 1997 and released by Pioneer LDC in the U.S. as Tenchi the Movie 2: The Daughter of Darkness. Her character proved very popular and would later be imported with a different background into the Mihoshi Special (where canon Tenchi creator Kajishima-sensei did her character designs), and after gaining a fan-base Kiyone would make future appearances in many Tenchi Muyo! series.

In the Mihoshi Special, Kiyone is assigned to rescue Investigator Tenchi and secure the stolen Ultra Energy Matter from the space pirate Ryoko with her. Accompanying them are Ayeka, the heiress of Jurai plutocrats, and the apprentice detective Sasami. After capturing Ryoko, Kiyone after looking through Ryoko's things found out the infamous Professor Washu was behind Ryoko's actions. But after Mihoshi released Ryoko who kidnapped Tenchi again, Kiyone became very depressed over Mihoshi's actions, feeling her career was now down the toilet. After heading to Washu's hideout Mihoshi, Kiyone and Ayeka were captured. Fortunately, Sasami became Pretty Sammy, and Kiyone was able to stop Washu from using her Galaxy Destroyer. But because of Mihoshi's bumbling, Kiyone accidentally fell over and disappeared. Although Mihoshi thought that Kiyone had sacrificed herself out of duty, unbeknownst to her Kiyone was still alive, alone and floating adrift in space loudly threatening her partner's imminent demise.

Kiyone proved appealing enough to become part of the TV series cast. A PC-FX game based on Tenchi Muyo! Ryo-Ohki (Tenchi Muyo! OVA 9.8: Crashing into Kiyone) later re-introduces her character, as she is ordered to check on her old partner. Joining her is the stowaway GP officer Hakua, a "protegé" of Mihoshi who finds it hard to believe that the erstwhile Kiyone was never actually dead. She is able to verify a few points in Mihoshi's story however, meaning that while details were exaggerated the "Ultra-Energy Matter" caper does have its basis in fact.

Kiyone makes scant appearances in Hitoshi Okuda's manga, as the comics are based on the continuity of the first OVA, in which Kiyone does not take part. In the rare times she does make an appearance, it is usually for a role that takes place outside of "official" canon (i.e. Tenchi Muyo! in Love or Pretty Sammy adaptations), sometimes breaking the fourth wall by begging for a larger part. The GP officer also cameoed occasionally in Okuda's collection of yonkoma, "Tenchi, Heaven Forbid! G...", though she seems much happier forgotten, as the manga explains - tongue-firmly-in-cheek - Kiyone's whereabouts and just why she isn't a force in Tenchi Muyo! Ryo-Ohki.

In the first Tenchi television series continuity, Kiyone was assigned to locate her missing partner Mihoshi. But to her disbelief, not only was she alive but she was living with the galaxy's most wanted space pirate Ryoko, the two missing Jurai princesses Ayeka and Sasami, and the galaxy's legendary mad scientist Washu. Kiyone tried to arrest Ryoko with some assistance from Ayeka but failed because of Mihoshi's clumsiness. After contacting headquarters, Kiyone found out that she and Mihoshi had been transferred to patrolling the Solar System, which was very depressing for her. Not wanting to be a burden on Tenchi Masaki, Kiyone decides that she and Mihoshi would move into a low-rent apartment. However, difficulties arise as the officers take part-time jobs due to Mihoshi's incompetence and their GP duties, which often require immediate response (even in the middle of work).

After Ayeka and Sasami are accused of treason on planet Jurai, Kiyone found out that the Galaxy Police were aiding the Jurai military with the task of locating them. Because of Mihoshi, both of them were accused of being accomplices. With little choice, Kiyone joins the others to journey to Jurai to clear their names, using her shuttle the Yagami to travel across space; Washu created an interdimensional invention that allowed the Masaki home to be put into the Yagami. At the end of the series, after being promoted to the GP's high ranks, Kiyone returns to Earth, presumably having grown fond of Mihoshi and the rest of the housemates.

At the beginning of the first film, Kiyone and Mihoshi witness Kain's escape from and destruction of the GP headquarters, and are later "volunteered" by Ryoko to go back in time with the group to 1970 to save Tenchi's then-teenaged mother Achika from the criminal. While the others pose as students, teachers, or stay out of the way altogether, Kiyone has the decidedly unglamorous task of going undercover as the school janitor.

Later returned to the present for a brief time by Washu, Kiyone brings information and equipment back with her to help everyone deal with the threat. When a plan to convert spiritual energy from Tokyo's five-color Fudo shrines to generate enough Jurai power to recapture Kain fails, Washu sends the dimensional cannon, a weapon with enough destructive power to raze entire galaxies. Kiyone is charged with operating the machine, and fires just as Achika exits subspace with Kain in close pursuit, killing him and ending the villain's threat to the Masaki family.

In the final installment of the Universe continuity, Kiyone and Mihoshi break into the Galaxy Academy to hack into their dimension stabilizing system so that Washu will be able to create a gateway to track down the missing Tenchi. Later, the two officers set up energy collectors on all the camellia trees planted by Katsuhito Masaki, thus giving Ryoko and Ayeka access to the fantasy world created by Haruna the woman keeping Tenchi there.

In Tenchi in Tokyo, Kiyone's character design and personality are quite different than in the previous series.

Kiyone acts more along the lines of a manic-depressive and is more driven towards being promoted and assigned to the Galaxy Police headquarters than her Tenchi Universe counterpart. She also expresses romantic feelings for Tenchi, feeling that he would be better off with a law abider like herself than with the others, though this may have just been to goad Ryoko to come back to Earth.

Mihoshi and Kiyone were originally part of the Galaxy Police task force assigned to apprehend the space pirate Ryoko and her partner Washu in order to recover the stolen Jurai Light stone. After the incident, Kiyone was unhappy with being assigned to Earth (her crush on Tenchi nonwithstanding) and would stoop to anything to put her life back on track. However, after arresting the criminal Bent Cougar in episode 18, she seems to be pleased with the opportunity for transfer to Pluto and was willing to forget all of her experiences on Earth, even after finding out that Ryoko once again became a space pirate. But after being assigned to infiltrate Ryoko's gang, Kiyone decided to find out why the space pirate returned to her old ways (at Mihoshi's suggestion). However, Yugi's servant Hotsuma, not wanting Ryoko to reconnect with her old friends, framed Kiyone and Mihoshi for tipping off the Galaxy Police and they fled.

Kiyone became more stable and less obsessed with matters concerning her job and promotion, and in the end chooses friendship over career ambitions by returning to Earth with Mihoshi to fight Yugi. But their shuttle was shot down en route by Tsugaru, another of Yugi's attendants. Using an experimental antimatter bullet, Kiyone was able to kill Tsuguru after Mihoshi shielded her from an attack; she then helped Tenchi and the others in the final battle against Yugi. Shortly thereafter, the two GP officers are all too happy to patrol the Earth beat once again.

While not seen in the actual series, the whip-wielding Evil Kiyone makes her appearance in the music video for "Pretty Sammy, the Magical Girl", played during the end credits of the Mihoshi Special. This short, originally part of the Tenchi Muyo! Soundfile, marked Pretty Sammy's video debut, with Kiyone serving as the magical girl's first-ever animated foe. With her henchmen in tow (one being Tenchi's school friend Amagasaki in the Tenchi Muyo! continuities), Kiyone interrupts a lover's kiss between Sasami and Tenchi, stealing the boy away with her magical powers and cackling madly as they escape in her bicycle-powered spaceship. By transforming into Pretty Sammy, Sasami is able to stop them cold with the Pretty Coquettish Bomber, saving Tenchi from the ample witch's clutches.

In spite of gaining a small measure of popularity in Tenchi fandom, this Kiyone never makes a second appearance in later incarnations of the series.

During the Pretty Sammy OVAs, Kiyone - as Yuri Kiyone (清音 由梨 Kiyone Yuri?) (she was given the first name of her Japanese seiyu, Yuri Amano, while her first name became her family name) - works alongside Mihoshi Mizutani at CD Vision, the music store owned by Sasami and Tenchi's mother Chihiro. Kiyone, a first-year ronin, is somewhat depressed, as Mihoshi had made it into college while she had failed her entrance exams. Kiyone is also unlucky at love, and it doesn't help her much that Mihoshi seems to be able to keep score on how many times she's struck-out in finding a man.

In Magical Project S (AKA Pretty Sammy TV), Kiyone - as Kiyone Amayuri (雨百合 清音 Amayuri Kiyone?) (her last name is a portmanteau of the name of Yuri Amano - Amano Yuri - although using different kanji) - works at Sasami and Misao Amano's school as the teacher of a neighboring class. Kiyone has known fellow teacher Mihoshi since junior high and deeply resents her. The noise from Mihoshi's class has a tendency to bother Kiyone incessantly, and she would jump at the chance to prove that she is a better teacher than Mihoshi.

What could have been an arranged marriage to Andou Toyokawa was busted by Pixy Misa and her Love-Love Monster Break-Up Girl, though most likely to the teacher's benefit. Having a rational mind, she finds it impossible to accept things so outside the norm as the events that often transpire at the school, and usually faints dead away when insanity erupts. 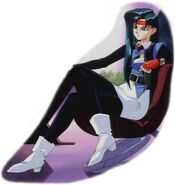 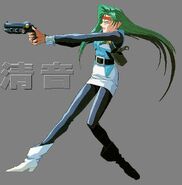 Kiyone Makibi in her GP outfit 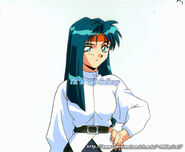 Add a photo to this gallery

Retrieved from "https://tenchi.fandom.com/wiki/Kiyone_Makibi?oldid=18089"
Community content is available under CC-BY-SA unless otherwise noted.