In this series, Sasami Kawai, a young Japanese schoolgirl, is asked by the magical queen-to-be Tsunami to become "Magical Girl Pretty Sammy", a champion of justice. She is constantly harassed by Pixy Misa, an evil magical girl, created by Ramia, a rival candidate for queen of the magical world. However, Sasami is unaware that Pixy Misa's real identity is her best friend, Misao Amano, who herself in unaware of the transformations forced upon her via the hypnosis of Ramia's brother, Rumiya.

Magical Girl Pretty Sammy should not be confused with the 26-episode television series Magical Project S, which aired between the release of the second and third OVA episodes. These two series take place in different continuities, though they have many similarities, including a similar premise, the same cast of main characters, recasting major Tenchi Muyo! characters in new roles, the quality of their musical tracks- as many of the them are parodies of popular karaoke tunes, and serving as a parody of contemporary magical girl anime, particularly Sailor Moon.

In September 2017 AIC announced a crowdfunding campaign for a five-minute promotional video for a sequel to Magical Girl Pretty Sammy, to fund a video to pitch to sponsors with the aim of green-lighting an anime series. the campaign ended with only reaching 12% of the goal, and no more word of that production was heard.[1] In 2021, when it was announced that Toei Animation had entered an agreement to co-produce some classic properties, a Pretty Sammy spin-off was mentioned as a project they want to release.[2]

Magical Girl Pretty Sammy originated not in animation, but in voice drama, beginning in 1993 with the release of Tenchi Muyo! Ryo-ohki CD Special 1 (Creation of the Universe Journey Across Space-Time). Here, Washu's newest invention, the Dimensional Controller, is glitched by the girls, creating several parallel Tenchi! worlds. Stories from the drama would later be adapted for Tenchi Universe' "Time and Space Adventures" arc (episodes 11-13). A second CD release, Tenchi Muyo! Ryo-ohki's Christmas, incorporated ideas revisited again in the series, drawing on Tsunami as the source of Pretty Sammy's magical powers.

The music video for "Pretty Sammy, the Magical Girl", originally part of the Tenchi Muyo! Sound file, marked Pretty Sammy's anime debut. After having a kiss between her and Tenchi interrupted by the villainous Kiyone, Sasami must transform into her magical alter-ego to save her love and teach his kidnappers a lesson. Though the Sound file was never released officially in the U.S., this short can be seen during the end credits of the Mihoshi Special.

The Mihoshi Special was the first time Sammy was ever featured as a full-fledged character in the animated medium, and after her appearance in Episode 12 of Tenchi Universe (Tenchi Muyo! TV: Time and Space Adventures Part 2) in a costume that more resembles Sailor Moon's than her original outfit, the magical girl would go on to star in OVA specials and television series of her own.

Collectively, the various Pretty Sammy vehicles spoof the magical girl (mahō shōjo) genre of anime (particularly Sailor Moon, with the "bishōjo senshi"/"champion of justice" theme), using the characters from AIC's popular Tenchi Muyo! series (where Sasami is known as Sasami Masaki Jurai). Ryo-Ohki (who is a male in both of the Pretty Sammy series) is Pretty Sammy's assistant and plays the same role that Luna (of the Sailor Moon series) had done, including keeping the fact he could talk a secret.

The series was dubbed into English by Pioneer Entertainment and the three episodes were released individually on October 24, 1995, March, 25, 1997, and April 28, 1998. It was also bundled with the Mihoshi Special for a DVD release in 2002.

Sasami Kawai, an ordinary schoolgirl, is selected by a woman named Tsunami to become a magical girl and pass tests on her behalf so that she can become become ruler of the magical kingdom of Juraihelm. However, Sasami's best friend, Misao Amano, is chosen by Ramia, who also wants to rule Juraihelm, to also become a magical girl, Pixy Misa, to undermine Tsunami's efforts. Pixy Misa uses her magic to interfere with the rivalry between Ryoko and Ayeka, two girls who vie for the affection of Sasami's older brother Tenchi.

American software CEO Biff Standard dreams of a "World Standard", an integrated, conformist utopia that will be created through his company's computer operating system, SynchroniCity, which is used by people everywhere in the world except for Japan. Ramia decides to lend Biff a helping hand with getting Japan to adopt his software for her own gains, but its up to Pretty Sammy to stop them when its revealed Biff's radical vison requires crashing the Moon into the Earth!

A comet abruptly engulfs Ramia while she and Pixy Misa battle Pretty Sammy in space. Later on, she has disappeared, having landed on Earth without her memories and now cared for by a man named Hiroshi. Meanwhile, Sasami, Misao, and others go to the Izu area where the comet landed to enjoy a recreational retreat, and Sasami meets a charming young man named Makoto, who looks a lot like Tenchi. However, it turns out that both Makoto and Hiroshi are extragalactic lifeforms that "assimilated" the memories of Pretty Sammy and Ramia respectively during their battle, and Hiroshi has inherited Ramia's desire to kill Pretty Sammy. 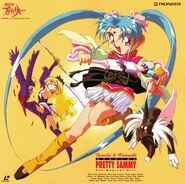 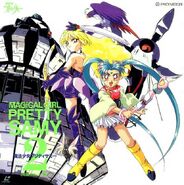 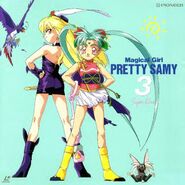 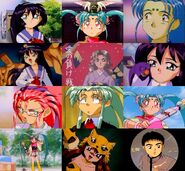