Doll is one of the three artificial humans created by the Senshi Civilization with the purpose to defeat Gaia.

Mexiah Furan is the older adopted sister of Chiaia Furan and the adopted daughter of Naua Furan. She is also a teacher and pilot for the Holy Land Academy.

Doll was created by the Senshi Civilization, and unlike her predecessors, was given to a human family to be raised. This was to allow her to better understand people, and not go berserk because of poorly understood commands. With Rea's disappearance, and Neizai's "death", she was the only known survivor of the three. After Gaia's defeat, it and Doll were sent underground with Doll reverted to the form of an infant, and her memory of the events erased. She was eventually unearthed and discovered by Naua as an infant with pink hair and was adopted as Mexiah Furan, who became Chiaia's older sister.[1] As Mexiah, she is the martial arts instructor at Holy Land Academy who, unlike her serious sister, is shockingly affectionate toward Kenshi. Also not only is she a Seikishi, but she is also a Seieishi.[2]

At some point, Babalun used his knowledge of Artificial Humans to activate an override built into them, which forced her to resume her original form as Doll, and allowed him complete control over her.

Doll has little regard for the importance of human life, as shown when she laughs while trying to kill Aura during an early encounter. Despite this, she has an attraction to Kenshi that she believes is a remnant of when Mexiah's personality was dominant. In the last episode, Doll realizes she loves Kenshi as much as her other half Mexiah and she tries to prevent Lord Babalun from harming him. Thanks in part to her actions, Kenshi manages to disable Gaia and free her from it and Babalun. Once free she again assumes the form of Mexiah and she and her sister Chiaia are reunited.

When piloting her Seikijin, she can easily defeat any opponent except for Kenshi, the only one who can stand his ground against her. Her Seikijin wields a scythe (which doubles as a gun) and the Shield of Gaia, a massive and indestructible shield with a mouth capable of eating parts of her opponents, and its black color implied that she may be the legendary "Seikishi of Darkness" destined to destroy the world and Kenshi's nemesis.

In her form of Mexiah, she is rather tall, lightly tanned, and well endowed.  She has green eyes and pink hair which generally she has flared out to the sides of her head, in a gravity defying fashion.  When in uniform as a teacher, she has it in curls over her left shoulder.

In her form as Doll, she is a little on the short side with pale skin, and long straight green hair, with bangs covering her eyes. As Mexiah, her Seikijin is lavender with a pink lion's mane armed with a launcher. 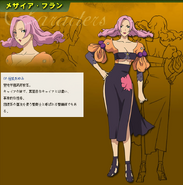 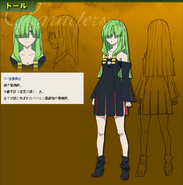