Mikami Kuramitsu (九羅密 美守) is the headmistress of the Galaxy Police Academy, appearing occasionally in Tenchi Muyo! Ryo-Ohki and fulfilling a more substantial role in Tenchi Muyo! GXP, especially in the novel's version of events.

She is the older sister of Minami, aunt of Mitoto and great aunt of Mihoshi and Misao, as well as the granddaughter of Washu Hakubi. Mikami is a high ranking member of the Kuramitsu family, the traditional rulers of the planet Seniwa Her father, Mikumo, was the head of Seniwa's government for tens of thousands of years, until his apparent death during the events of the GXP novels, after which she and Minami become the named heads of the family and Seniwa.

In the beginning of OVA3 and in the anime version of GXP She is known to be serious and strict, but fair and kindly to the students of the academy. She first appears in the OVA in order to charge her brother and her great-nephew Mashisu for their involvement in the Choubimaru incident. In the GXP novels and in OVA4, It is revealed that Mikami's middle-aged appearance is an illusion and that her real appearance is that of a woman in her late twenties or early thirties, with a figure rivaling or surpassing her niece and great-niece's. When in this persona, she also sheds a lot of her serious composure and acts in a provocative and flirty attitude that matches her outward appearance and acts similarly to Airi, in that she loves messing with people. Her facade is indicated to be the present fashion for people in certain positions, to look cosmetically older than their normal appearance.

She also shows an interest of a romantic nature in Seina, suggesting that, after his graduation, she may attempt to join the group of women who are seeking a relationship with him.

In the GXP novels and in background information released by the author, it is revealed that, when younger (thousands of years earlier), she was a model GP officer and that she and her brother were both seen as the first and second most likely inheritors of the leadership of Seniwa after their father died or abdicated his position, but that she rebelled in some unexplained way and lost prestige in the eyes of the family and government. It is also indicated that, when she was young, Mikami and Seto dated, and the pair are still on good terms.

When her father is on her deathbed, she acts as confidant to Washu, who reveals to the Kuramitsu family the unknown knowledge that she is Mikumu's mother and demands that she handles his funeral preparations and hands down Mikumu's decisions on the inheritance of leadership positions. Through Washu, Mikumo declares Minami to be the presumptive leader of the Seniwa government and Mikami to be the head of the family council. She also seems to be one of very very few that knows that Mikumo faked his death. This also greatly infuriates Taima Kuramitsu that he should have been named leader of both positions

However, Mikami is also instrumental in investigating and revealing the attempted coup of the Galaxy Police by the Galaxy Army, led by Taima and the Seniwa military, seeking to revitalize the military might of the empire. Through her actions, she also gains more power in the Galaxy Federation.

In the fifth season of Tenchi Muyo! Ryo-Ohki, she is shown to be one of the many volunteers to train Kenshi Masaki before he is sent to Geminar. What exactly she teaches him is unknown but, as she does so in her primary persona, she seems to mostly succeed in flustering the young boy. 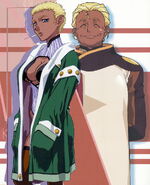