Miron Pham is one of the main heroines of Paradise War, and appears in Tenchi Muyo! Ryo-Ohki.

Miron has very long wavy blond hair. She has a voluptuous adult figure and likes to show it off. When wearing formal clothes, they will still be tight fitting and will wear high heels to accentuate her long legs when possible. Although, she does tend to wear a lab coat much of the time.

When it was decided to hold a galactic proxy war to determine the leader of a new pirate nation on Earth, a group that knows of the various aliens residing in Masaki Village and at Tenchi's house demanded an observer be present and named Miron to the position, probably believing the young woman would be easy to use. She serves as a teacher to Shou and the Girls (in some subjects, the girls are not even at a primary school level) and is the only doctor on the island.

She was a child genius from a very prominent family who, until recently, looked like a little girl even as she was approaching 21. She also lead a very sheltered life, never being able to connect with peers her age, protected by bodyguards, and typically working with, and beyond the level of older scientists. Her older co-workers adored her, however, and considered her like a daughter, or granddaughter. Concerned about her slow development, they concocted a diet and health regime that produced rapid results and she bloomed into a mature looking voluptuous woman almost overnight. Unfortunately, she was still secluded in a lab most of the time and most men not deemed worthy of her status. Between her brilliance, her new found mature beauty, and a sudden independence she has become a forceful personality and a hard to control pervert, though one with a lower level of emotional maturity you might expect. She had been trying to figure out a way to gain access to space and almost immediately started to try and seduce Minamida/Seina in hopes of becoming one of his brides. She also teased and romanced Shou Kukoma as well, in case he succeeded. Though she developed genuine feelings for him as well. She also became close to the main representatives in the proxy war, Alea Balta, Dird Shank, Palty Jurai, Apuesta Daluma.

After Shou's victory, she was initially despondent because she believed it meant that her memory would need to be erased, as that was the initial deal- once a victor was named, she would have to have her memory altered to keep the situation a secret. Howeer, Shou tells her that, as a minor, he'll need a guardian, and asked if she'll take the position. Delighted, she either puurposely or teasingly mistakes this as a marriage proposal. Soon after, she becomes Earth's governmental representative in the Galaxy Federation Assembly and gains her wish of Galactic travel in her own right. After things settle on Banjo Island, she is sent with Shou to study at the Galaxy Academy.

Miron formed a quick friendship with the mischievous magician, Jovia Jovis and they have seemingly traveled together in the galaxy a little, having been able to present a Manzai skit to Lady Seto and Airi. When Kenshi was brought to Banjo Island for practical training (some would say "playing"), the two of them formed a "villainess duo" to challenge Kenshi and the others to defeat them. 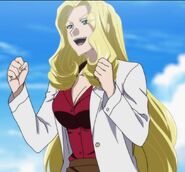 Add a photo to this gallery
Retrieved from "https://tenchi.fandom.com/wiki/Miron_Pham?oldid=24483"
Community content is available under CC-BY-SA unless otherwise noted.