Noike Kamiki Jurai (神木 ノイケ 樹雷, Kamiki Noike Jurai), formerly Noike Sakazua, is a character in Tenchi Muyo! She is the adopted daughter of Seto Kamiki Jurai, and is introduced as the fiancée of Tenchi Masaki in the likewise-named OVA episode Fiancée.

After Washu Hakubi's scientific partner and best friend Naja Akara disappeared during a pirate attack, Washu cloned her in grief. The clone was much more malevolent than the original Naja and assimilated with the body of male prototype of Ryoko because of its power, resulting in Kagato. Kagato had a hatred of women and discarded the remnants of his female half which took the form of a little girl whom he attempted to kill. Tenchi Masaki's mind drifted into the past after being sliced in half by Z's Light Hawk Wings in the present. Tenchi found the little girl crying during Kagato's attack, asking why he hated her so much and declaring that she's "Kagato too." Tenchi rescued her and drifted off into space, assuring her that she could stay with him forever.

Afterward, Tenchi was pulled back to the present and she drifted off into some other point in time. The little girl was found by the woman who Noike knows as her mother. In an attempt to convince her boyfriend that the child was his to keep him around, Noike's mother had Dr. Clay perform illegal modifications to regress her back into a baby. As a result of the procedure, female Kagato's consciousness split in two; the personality of the white-haired girl saved by Tenchi, and a new personality who became Noike. The little girl's consciousness reverted into astral form while the amnesiac Noike consciousness kept the physical body, the latter taking control while the former did things subconsciously. It would also seem that Noike's mother genetically modified Noike's hair to be the same color and texture as hers to further convince her boyfriend that she was their child.

Sometime later, Noike was placed into an orphanage by her mother who didn't want a child to interfere with her relationship. In the orphanage, she worked hard to take care of the other children and even worked in the fields in order to give everyone fresh assortments of food. However, for most of her life, Noike was tormented with thoughts of what tragedy her mother had to endure in order to abandon her so.

In adulthood, Noike joined the military but eventually left to be trained at the Galaxy Police Academy and worked her way to becoming a Detective 2nd Class with Mihoshi Kuramitsu as her partner. There was one instance during her tenure in the G.P. that had Noike confront her past. While investigating a simple traffic accident, Noike ran a genetic I.D. check on a woman involved in the incident and found that it was the mother who abandoned her. Noike's mother proceeded to tell her the story of her abandonment and pleaded with her to let her go because she got "a good man." Noike came to terms with who her mother was and moved on.

After becoming a Detective 1st Class, she became acquainted with Seto Kamiki Jurai, who would adopt Noike into the Jurai Royal Family. Noike would then be bonded and partnered with the third-generation Royal Tree named Kyoko. Kyoko was made using a secret design to make her as powerful as a second-generation royal treeship, due to Ryoko's complete defeat of any ship other than second-generation and above. Kyoko was designed with a "terminal body," (like Ryo-Ohki) which appears a green blob-like creature, which acts as a wireless terminal for controlling the ship and displays the personality of all royal trees and Ryo-Ohki, becoming jealous when she doesn't receive enough attention.

Level-headed, and tactful sums Noike up. Her experience at the orphanage led to her becoming a charge-taking good woman in her professional and personal life. She can be compared to Hasegawa character, Galaxy Police Officer Kiyone Makibi. Much like Kiyone, Noike often gets irritated by Mihoshi's bumbling and handles her through yelling.

In Tenchi Muyo OVA 3, she is introduced by Tennyo, Tenchi's elder sister as Tenchi's fiance, arranged by Lady Seto. Though when Tennyo goes to teleport Noike in to introduce her, Airi, Prince Yosho's wife, and Tenchi's grandmother appears instead, causing much confusion during which Tenchi decided to go work in the carrot fields to get away from the commotion. Noike, who was supposed to show up with Airi, ran off due to being intimidated by the thought of being engaged to the supposed amazing prince (also Tennyo and Airi were having a little fun with her by forcing her to play dress-up) and unknowingly meets Tenchi and helps him with his fieldwork in exchange for his delicious carrots. Noike is flabbergasted to learn that the kind boy was the man she's engaged to marry.

The initial impression everyone gets when they hear Seto's adopted daughter is coming is that Noike would be a prim and proper royal princess. Instead they soon find that she is a hard worker who is not afraid to get her hands dirty. Noike proves herself to Tenchi's extended family by taking charge of the house and dispelling the chaos after Tenchi falls ill as a result of it. Her first few days spent in the house include working around the house and doing various things that earn her the trust of the rest of the girls, such as nursing Tenchi back to health, getting a truck to help Tenchi in the fields, and teaching the other girls to drive, In order to make Ryoko and Ayeka comfortable with the situation that no one had control over, Noike reveals to the two that the arranged marriage was in fact, a pretense; she was actually sent by Lady Seto to monitor the Masaki household, as it has the highest concentration of power in the universe due to all of its inhabitants and is a military might belonging to no nation. Additionally, she may be called upon to turn against Tenchi if the political situation warrants it. Despite this, Noike finds she has fallen in love with him anyway.

Noike’s job was to come and monitor the house whose inhabitants are the most powerful people in the galaxy. She made it clear in episode 16 that they’re a military might belong to no nation; in episode 13, they proved to Emperor Azusa and Empresses Funaho, and Misaki that they have absolutely no intention of going to Jurai (as of now) so what does Seto do? Send in a den mother to keep tabs on them, of course, with a couple of ulterior motives regarding the personal situation and not the political.

How did Noike hope to make sure this group with more power than any known army would never become an army? Make sure they were a family in a home instead of a bunch of extremely powerful psychological cases living under a roof on an underdeveloped planet. Her ulterior motive: she needs a family. Being adopted by Seto is one thing, but they do not have a typical mother/daughter relationship with them being who they are so moving into the house and being integrated into a family is the best thing for her. Seto’s ulterior motive: softening Noike’s rough edges, giving her a family, and of course, playing matchmaker as usual and as Sasami said, to throw pebbles into the water to see how big the ripples are.

Noike often has dreams of herself as a little girl being rescued by a mysterious "big brother" who she realizes is Tenchi, not knowing that the dreams are actually her subconscious memories of their very first meeting. Also unbeknownst to her, Z was able to watch the goings-on of Tenchi's house through her eyes.

Dr. Clay, being very arrogant, had a habit of placing his mark on all of his work, and put his seal on the cells of female Kagato, which, after she reverted to astral form, prevented the two personalities from fully merging and becoming whole. Dr. Clay's seal could also be used as surveillance to see through Noike's eyes, allowing Z to watch Tenchi. At the end of OVA 3, Washu removed the programming and female Kagato fully merged with Noike after telling her that they should try their best in regards to their love for Tenchi and saying that they should have dinner and take a bath with him again.

Therefore, Noike falling in love with Tenchi was a fairly simple process, as female Kagato desired to be with her "big brother" again after he saved her.

After the three Chousin goddesses reverse time back to before the OVA 3 events occurred, without Z in this timeline to attack Tenchi, causing him to go to the past, future Noike arrived with the little cabbit Fuku in order to make sure that all of the events come to pass so that the timeline would be corrected and she could still meet Tenchi, and Fuku would still be able to meet Seina, the protagonist of the OVA spinoff Tenchi Muyo! GXP. During the new timeline's Choubimaru incident, Noike (or rather female Kagato's subconsciousness within her), detonated the cannon of the powerful ship, the Choubimaru, causing Tenchi to defend the Earth from it and once again get knocked into the past, causing him to save female Kagato once again, and the events come to pass as they had before.

Noike is now one of the girls a part of the extended Masaki Family; in love with Tenchi and vying for his affection. As one of the GXP doujinshi notes, Noike is an earnest person that just never seems to be able to get married, even though she seems like she would. Perhaps Noike is so competent, earnest, and powerful, she intimidates most men, even though she could be a wonderful wife. So, men either fear her or want to use her. That worried Seto, so she hoped something more developed between Noike and Tenchi.

In the fifth season of Tenchi Muyo! Ryo-Ohki , Tenchi, Noike, and the other girls all come to the mutual agreement that they want to live together as one family and are given their blessing to be married by their families. A formal wedding may not have occurred yet, but they are all living together as a married group. She, like the rest of the household, help train Kenshi Masaki in their various specialties in preparation for his transport to Geminar. In her case, she teaches him in the tactics of a Galaxy Police Officer. 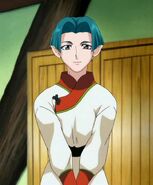 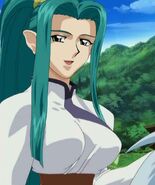