Ryo-Ohki (魎皇鬼, Ryōōki) is one of the main characters of the Tenchi Muyo! metaseries. Ryo-Ohki is a cabbit: A cross between a cat and a rabbit. Overall, Ryo-Ohki's personality, traits and abilities vary greatly depending from series to series, but they usually include shapeshifting and a love for carrots.

In Tenchi Muyo! Ryo-Ohki, Ryo-Ohki is a unique artificial lifeform created by the universe's greatest scientist, Washu. Ryo-Ohki was created by combining a powerful creature known as Masu with some form of mineral lifeform. She is basically created to be the companion of Washu's other creation Ryoko, as well as her powerful spacecraft. Ryo-Ohki, along with Ryoko, were initially created by Washu to wield the power of her gems, which contain all of her godly abilities, similar in power to that of the first generation Royal Trees of the Imperial Family of the planet Jurai which are descended from Washu's sister Tsunami.

After Washu was sealed away on her battleship, Soja, by her assistant Kagato, he claimed Ryo-Ohki and Ryoko as his own in his quest for ultimate power, brainwashing and controlling them. With Ryoko as her captain, Ryo-Ohki helped her destroy 28 planets and 69 colonies for Kagato's personal gain. 700 years before the beginning of OVA 1, Ryo-Ohki attacked and almost decimated the planet Jurai with her owner Ryoko under the control of Kagato. The pair were defeated for the first time when Jurai's Prince Yosho chased them all the way to the planet Earth, and subdued Ryoko by taking away her gems. Yosho sealed Ryoko inside the cave near the Masaki Shrine and Ryo-Ohki "fainted" on the ground near the shrine which became a lake.

In OVA 1's second episode, a resurrected Ryoko receives one of her gems from Earth boy and series protagonist Tenchi in order to awaken Ryo-Ohki. Ryoko sends Ryo-Ohki into battle with Juraian princess Ayeka's Royal Treeship, Ryu-Oh and both crash onto the Earth near Tenchi's home. In the third episode, she regenerates as a small egg and proceeds to hatch into her "cabbit" form which she uses while not in spaceship mode.

The new Ryo-Ohki, though essentially the original's daughter, is a complete reincarnation of the spaceship, having all her memories and powers; however, Ryo-Ohki has new abilities. Before OVA episode 3, Ryo-Ohki was never a cabbit. Ryo-Ohki was simply a crystalline ship with crystal terminals. Ryoko used part of her energy to merge her ship with a dying pet cat of Tenchi's as well as an earlier pet rabbit of his; leading to Ryo-Ohki's cabbit form. Ryo-Ohki the cabbit can merge with the ship form at will. Both Ryo-Oki in her humanoid form and the spaceship can operate separately (as seen in OVA 3). The ship's body normally rests at the bottom of the lake. The ship works best together, however. Ryo-Ohki the cabbit works as its computer module, akin to Jurai's Royal Trees and their ships. Without its computer module or the effect of Ryoko's gems, it would still have power akin to a 3rd Generation Juraian ship.

Following an incident later in the series in which she fully merged with her base, the Masu, she gains the ability to shift to two humanoid forms — a child form and an adult form. However, her adult form is only seen once (during her fusion with the Mass), both because she has the mind of a child, and because she has trouble walking on two legs in the body of a full grownup.

Ryo-Ohki is a legend throughout the universe and some are surprised to see her as a small adorable cabbit or a little girl.

She and young Juraian princess Sasami quickly become attached to each other while living at Tenchi Masaki's home, and she can generally be seen with Sasami rather than Ryoko though their connection is still a deep one and as seen in OVA 3 episode 1, Ryo-Ohki still craves attention and affection from Ryoko.

As mentioned before, Ryo-Ohki was originally created by Washu as a means for Ryoko to access and control the vast power contained within her gems; hence the small jewel embedded into Ryo-Ohki's forehead. The combined power of Ryoko and Ryo-Ohki is as great as a Juraian 1st-Generation Royal Treeship. When the pair reaches a certain maturity, if Ryoko is in possession of all three gems, they will be able to produce ten Light Hawk Wings; the same amount as Tsunami. An additional danger is that it is completely possible to mass-produce more Ryo-Ohki, which is a great fear to the Juraian Royal Family. Washu, however, vows to never clone Ryoko or Ryo-Ohki though she does end up creating Fuku, Ryo-Ohki's little sister and computer unit for the Kamidake II, a powerful spaceship which belongs to Seina Yamada, main protagonist of OVA spinoff, Tenchi Muyo! GXP

Ryo-Ohki's personality is that of a carrot-loving animal who could only communicate through meowing, although when she first took on humanoid form, she was able to say the word carrot. However, in Tenchi Muyo! GXP, which takes place 1 year after the conclusion of OVA 3, it is shown that in her humanoid form, she is able to speak somewhat fluently. In the novels, Ryo-Ohki still speaks in Meows, though Kiriko reveals it is a high speed compressed language, and that even without body enhancement, people can eventually understand it.

Ryo-Ohki also has a bit of a crush on Tenchi, though it is not completely romantic due to her immaturity. A dive into her mind reveals that it is filled with fantasies of her and Tenchi harvesting carrots. In addition, she likes to entertain people in her child form; such as the small dance number she presents to Juraian Emperor Azusa in OVA 2 episode 13 and to the "Devil Princess of Jurai," Lady Seto in OVA 3 episode 17. She has the mental state of a child, and does not appear to think beyond her next carrot or hug. In GXP, Airi Masaki reveals that the key to Ryo-Ohki's (and her younger sister, Fuku's) power is to show her compassion and get to know her as a being with feelings.

Ryo-Ohki grows close with Kenshi Masaki as his older sister during his childhood, and helps train him for his mission to Geminar with extended bouts of capture-&-tag (and merciless ticklings afterwards) as well as taking him on random trips in the Solar System. These interactions help her mature more in both mind and body, to the point that she starts taking her adult form regularly. Although she ultimately gets taller than Sasami (who by that time is a teenager), Ryo-Ohki still considers herself the "little" sister of the two.

In the If manga, Ryo-Ohki gives birth to a litter of three kids, born as cabbits after a (asexual?) pregnancy that involved her turning into a large mass of crystal. All three kittens gain the ability to take human form, and become playmates to Ryoko and Ayeka's daughters, and become close to Seina's son with Amane.

Ryo-ohki reunites with her sister Fuku 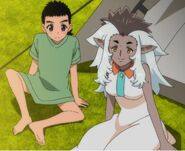 Kenshi asks Ryo-ohki why everyone is smiling