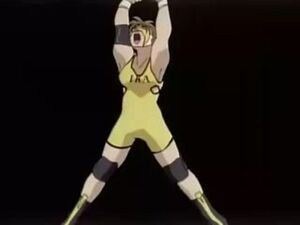 She was created by Yugi to prevent anyone from interfering in the relationship between Tenchi and Sakuya, until she was defeated by Katsuhiko Amagasaki.

Sadako Ikarinu was known as a great wrestler who attended Tenchi's school years ago, leaving behind only her mask, found by some students preparing for the school festival.

Her first appearance was in episode 15, during preparations for the school festival. As a means of preventing encroachments on Tenchi and Sakuya, Yugi used her power on the lost mask to create a copy of the fighter Sadako Ikarinu, who appeared every time someone tried to get in between Tenchi and Sakuya, and in this case, it was Amagasaki, who was always thrown into the distance without realizing who was doing it.

By the late afternoon, Ikarinu had pondered never having met a worthy opponent who could beat her, but was impressed by Amagasaki's determination to always return. Amagasaki found her on the school terrace, and was ready to face her. Despite suffering from a disadvantage at the start, Amagasaki envisioned Tenchi, Sakuya and his friends supporting him and cheering for his victory, giving him enough strength and courage to face Ikarinu, defeating her with a counterattack. Even falling, Ikarinu was happy to have finally found an opponent of value, disappearing soon after, leaving behind only her mask, which was later found by Amagasaki, who vibrated with joy to know that his opponent was Sadako Ikarinu.

Ikarinu is a beautiful woman with short brown hair and a voluptuous figure. She wears a wrestling swimsuit with "IKA" (short for her surname) printed on it, with black and yellow boots, knee pads, an elbow pad on her right arm and bracelets. Her face is always covered with a mask with a kanji

She is portrayed as a strong and determined woman, who does not retreat in the face of a challenge, but frustrated by never finding a rival in her league, until finding Amagasaki, who won it honorably, which made her very happy. It is worth remembering that it is a copy created by Yugi, which probably reflected the personality of the real Ikarinu, whose current whereabouts are unknown.

Sadako Ikarinu possesses strength and agility similar to that of a woman of her age and physical who practices exercises regularly, these possibly amplified by the power of Yugi, so much that its eyes shine every time that it fights. Uses a series of consecutive strikes used in wrestling.

This character (or at least her name) was inspired by Ikari Sadako, the first professional wrestler, famous in the late 1940s and early 1950s. 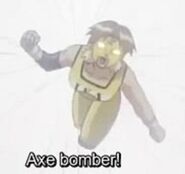 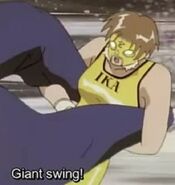 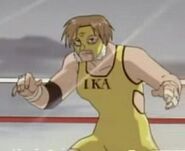 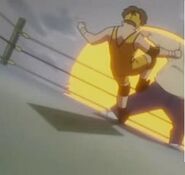