Sasami Masaki Jurai (柾木 砂沙美 樹雷, Masaki Sasami Jurai) is a key character in the Tenchi Muyo! metaseries as well as her own various non-canonical spinoffs.

In the Tenchi continuities, Sasami is the younger sister of Ayeka and so is also a princess of the planet Jurai. Within the Masaki extended family, Sasami usually takes on the dual role of younger sister/mother. She may be the most responsible of the group and takes care of all the cooking duties. She has a rarely-seen mischievous streak within her, however, and takes great delight in fooling the older girls.

Sasami has teal-colored hair usually tied in long pigtails with melon pink eyes. In the Tenchi continuities, Sasami also has an upside-down triangle birthmarked on her forehead, as a symbol of her status as Juraian royalty.

Sasami has appeared in every Tenchi Muyo! series, as well as/including several spinoffs based around her as the central protagonist. In almost every incarnation her personality, background, primary outfits, relationships, and abilities change. In some incarnations, her art style is altered more than others, though her basic coloring and structure remaining the same.

Sasami has a huge fan following across the globe and is the inspiration for what VIZ editor Carl Gustav Horn called 'The Sasami Effect', in that any young cute girl within a cast of characters will inevitably become the most popular. Possible examples of this include the Sailor Moon character, Chibiusa, plus many other "young" female characters in Japanese, French, and American series.

Sasami's personality is more mature in the OVA than in the other continuities, and more aggressive in the second TV and the Pretty Sammy spin-offs.

Centuries ago, Sasami stowed away on Ayeka's Royal Treeship, Ryu-Oh when her older sister decided to run away from Jurai in an attempt to search for their missing half-brother Yosho and seek revenge on space pirate Ryoko for nearly decimating Jurai 700 years before OVA 1 began. When the princesses arrive on Earth, they get into a battle with the resurrected Ryoko, resulting in all of them crash landing at the home of Tenchi Masaki. Shortly into the series, Sasami and Ayeka take to living on Earth with Tenchi's family (Tenchi, his father Nobuyuki, and his grandfather Katsuhito Masaki, who is later revealed to actually be Yosho), along with the cabbit Ryo-Ohki who is the reincarnation of the ship that almost destroyed her planet, and the other women staying in the house. She quickly becomes nearly inseparable from Ryo-Ohki. Sasami refers to the other women in the house as sisters.

Like the other members of Jurai's Royal Family, because of her connection to her Royal Tree, and body enhancement, Sasami has an extended life span. She appears to be a pre-adolescent girl when in fact she is over 700 years old. She was approximately 8 years old upon leaving Jurai and is still physically and mentally 8 due to Ayeka having kept Ryu-Oh in suspended animation during their search for Yosho. Sasami will continue to grow until she reaches a maturity where she can remain for centuries without aging past her prime.

Personality-wise, Sasami is a sweet, caring, innocent young princess who puts the needs of others before herself. She is an amazing chef and cooks regularly for everyone at the Masaki house. Even though she is (relatively) the youngest (even though, in actuality, Tenchi is centuries younger than her), she sometimes is the most mature of the extended Masaki clan. She also likes to play the occasional practical joke, as when she sent Tenchi to try and steal Ryu-oh's key from Ayeka in her sleep.

Sasami is a particularly interesting character because of the fact that she is assimilated with Tsunami, one of the Chousin - the three goddesses who created the universe. Tsunami is also the patron of the planet Jurai and progenitor to their mighty Royal Trees. Sasami assimilated with Tsunami after a near-fatal accident that occurred when she was three years old. During Ryoko and Ryo-Ohki's attack on Jurai, Sasami fell from a walkway in the Royal Arboretum, into a septic where the Royal Trees are grown near the roots of the original Royal Tree, Tsunami-no-ki. Sasami was fatally injured and Tsunami assimilated with her in order to save her life. Sasami hid her secret from those around her - including herself - because her greatest fear was that the real Sasami was dead and she was just a fake, which she thought would result in her being rejected by those she loved. When the truth was finally revealed, Ayeka informed Sasami that she didn't care and still loved Sasami just the way she was. Though they are separate, as Sasami grows, she and Tsunami will gradually become one and the same.

Because of her assimilation with Tsunami, Sasami is automatically bonded to the genesis Royal Tree, Tsunami-no-ki and the owner/captain of its ship, Tsunami-fune, which is obviously the most powerful ship in the Juraian Fleet.

Sasami's strength and endurance are also enhanced by the link with Tsunami-no-ki. Additionally, Sasami is an accomplished combatant, most likely taught by her mother who is the Supreme Commander of the Juraian Royal Bodyguard. For example, Sasami easily defeated Mashisu Makibi, a trained Galaxy Police officer. In OVA 4, Tenchi admits to sparring with her and being completely defeated by her skills. One of the cherry-like hair bands she wears is capable of becoming a battle staff. In OVA 3, Sasami admits to Mashisu during the battle that she is in love with Tenchi. When her connection to Tsunami was revealed, the girls understood that when Sasami reaches maturity, she will take on the appearance of the beautiful Tsunami and that she will become a threat in their battle for Tenchi. The fact that Tsunami has always appeared as Sasami's adult form, even millions of years ago, supports the theory that she and the young princess were destined to be one.

One year before she becomes Tsunami, coming home from school.

Sasami still wears an apron with carrot patterns as an adult. 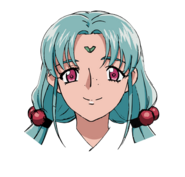