Seto is the mother of Juraian Empress Misaki, the adopted mother of Noike, grandmother of Princesses Ayeka and Sasami, and is a very powerful 'behind the scenes' figure in the politics of planet Jurai and is overall an extremely influential person in the galaxy. A survivor of the pirate raid of the Jurai Royal Space Academy post on planet K-1190 over 5,000 years prior to GXP, Seto was rescued by Juraian noble Ushio Kamiki and adopted into House Kamiki of the Juraian Royal Family. Because of this, Seto retains an intense hatred of pirates. She is married to the Kamiki clan's head, Utsutsumi.

Seto is bonded with a second-generation Royal Treeship called the Mikagami, which is known for her special attack, The Triple Z (AKA the "Genocide Dance"), which literally causes all enemies to stop in their tracks; either due to an Electromagnetic Pulse or some other mechanism, though the effect of this is left to the viewer's imagination. The novels suggests this isn't so much a special attack, but rather that the Triple Z is actually an announcement of 'surrender or die,' with her killing anyone who doesn't immediately power down their ship and surrender to her.

Because of her political craftiness and occasional violent temper, she is referred to as the "Devil Princess of Jurai," (a name she earned during various battles against pirates) and according to Ayeka, not even her father Emperor Azusa dared to cross Seto, and Ryoko goes on to say that even the ruthless Kagato knew enough not to mess with the Devil Princess.

Seto has a reputation as an unofficial matchmaker in the galaxy. She has been known to arrange marriages either for political reasons such as to cement alliances or just for fun. As her granddaughter Sasami puts it, she "likes to throw rocks into the pond to see how big the ripples are."

Seto had a small, but significant part in the third OVA series (sidenote: she commented that she used to hold Tenchi when he was a baby) It was revealed that she already knew that Prince Yosho had fled to Earth because he had secretly contacted her after he left Jurai in the wake of space pirate Ryoko's attack. Lady Seto is the reason Noike was sent to live with Tenchi; having her pose as Tenchi's fiancee, she commissioned Noike to watch over the residents of the Masaki House on Earth as it has the strongest concentration of power in the galaxy due to all of its inhabitants. Seto arrives at the house for a visit and sort of an "inspection." While there, she bonds with Washu Hakubi, the universe's greatest scientific genius, creating further speculation concerning her connection to Washu's best friend and scientific partner Naja Akara who coincidentally disappeared during the same pirate raid from where Seto was found.

She then borrows Jurai's greatest ship, Tsunami-fune, and used it to throw a party in hopes of bringing antagonists Misao and Mashisu together. Seto later presided over the meeting to punish those involved in the Chobimaru incident and offered to adopt Mashisu so she would be allowed to marry into the prestigious Kuramitsu family until Misao and Mihoshi's mother Mitoto arrived and announced that Mashisu had the Kuramitsu family council's support, which was confirmed when Seto's assistant Minaho announced in a panic that news had broken out on the upcoming wedding.

Seto plays a larger role in OVA spinoff Tenchi Muyo! GXP, and her particular dislike for

space pirates show heavily. Lady Seto first met Seina when his transport ship was under attack by pirates. Seeing how Seina's bad luck could be useful for the Galaxy Police, she agrees to support Seina and makes an exception for him to enter the GP Academy even though he comes from an underdeveloped world, feeling like the academy could use a little chaos once in a while. Some of her supporters didn't like the idea of having Seina joining the GP. Seto had also requested to Headmaster Mikami to have Kiriko reassigned as an instructor at the Academy in order to train Seina to become a man.

Later, when the Daluma pirate guild brought out their good luck fleet and succeed in escaping from the Mikagami, Seto had Seina deal with them. But when Seiryo was made the captain of the luckiest ship in the Daluma fleet, the Unko, knowing the Kamidake II was no match for it in its current state and that it would take too long for Fuku the cabbit, who is the power source for the Kamidake II, to mature, Seto decided to have Kiriko go through her tree bonding ceremony to merge her new Royal Tree Mizuki with the Kamidake II in order to give it the power it needs to bring down the Unko. After using her Mikagami as a test subject for this, the ceremony was performed (with her husband Utsutsumi, Emperor Azusa, and Shuzan Amaki as witnesses) and then the plan was executed. Seto later arranged a duel between Seiryo and Seina in order to have Seiryo surrender.

Near the end of the series, after Seina brought back the mecha that he found on the Wau planet, Seto held a meeting on the Mikagami, alongside Emperor Azusa and the empresses Misaki and Funaho, to discuss their findings on the mecha with Seina. Seto reported that the goddess Tsunami had told her that the first generation Juraian Royal Tree seed which is used as the mecha's power source is actually one of the two first-generation seeds that Tsunami had given to a person that had visited Jurai long ago. Seto also announced that Seina was now part of the Jurai royal family since the seed had bonded with him.

In the official GXP novels, Seto reveals she has recently regained her memories from before her adoption, and that she was the one to seal her memories. It is revealed that they are the memories of Naja Akara, confirming her identity. Washu presumably became aware of Seto's original identity while checking her health during OVA 3. She now uses the names Naja and Seto interchangeably when the two are in private. Kyo Komachi also deduced her identity while the two were working closely on giving captured pirates amnesty in Jurai and other shared interests. Kyo had been having a conversation with other pirate leaders who were gossiping about Naja, they were passing around pictures of Naja and one was sharing his theory about Naja being related to Kagato (which is true, Kagato was a clone of Naja) but Kyo recognized the similarity with Seto as well. She didn't mention anything about it to the pirates but delicately brought the subject up to Seto in a call. Seto readily admitted it, she says she doesn't usually share it to everyone, but also doesn't consider it a secret anymore. Yet something about the conversation made Kyo break out in a cold sweat and she knows not to share this secret with anyone else.

Many years ago, when Seto suffered a months long coma, caused by Mikagami's negative reaction to unleashing her deadly ZZZ attack the first time, Jurai found that it needed a double for her, someone to act in her place so spies and other powers did not realize the fleet commander was incapacitated. And so, "Mirror Seto," a mirror copy, was made (sometimes translated as "Kagami Seto"). Once Seto recovered, the two remained, allowing Seto to secretly be in two places at once, and one could rest while the other was active. Seto can also act as Kuis Panta, if that is what is needed.

This arrangement remained flawless until Mirror Seto met a young Seina on Earth. Kuis then kept her memories of Seina to herself.

Seto, having regained her memories as Naja, has found those memories have not been shared with Kuis.

Although they still share the majority of their memories, it will lead to them having more unique identities and will eventually probably lead to more people realizing they are separate individuals, ending the subterfuge.

Eventually, they tell Seina (who apparently is the key to completely separating them). Others also start finding out, with the help of high generation trees that can learn of Mikigami's secrets.

It can also be assumed that the majority of times that "Seto" met with Seina during the events of the GXP story, it was actually Mirror Seto. Probably during the initial pirate capture and definitely during the vacation to Imuim.

Kuis is romantically interested in Seina, Seto is not. 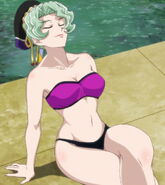