Shou's character design differs significantly between the novel illustrations and his appearance in doujinshi and OVA 5. In the novels he looks rather clean-cut, with straight hair and soft features. He is drawn often looking bashful, wearing his uniform shirt and tie or a white tee-shirt at his most informal. In the OVA he is rougher looking with a more informal beachwear look, looking almost like a tough street kid with a crew cut on the sides but spiky hair on top, red tank and baggy trousers. The short hair actually fits a description in the books that describes his hair being burnt badly on his first night and needing to be cut.

He’s a young teen, initially a first year in high school, who is from a poor family of three. His parents force him to move to Banjo Island, not knowing what they were sending him to do. It turns out that, by accepting, he has become the Earth's representative in a galactic proxy war to determine the leader of a new nation made up of fractured pirate guilds. He is completely unprepared to be the proxy in such a competition and is not actually expected to win. He has one odd skill--he never loses at Janken (Rock-Paper-Scissors).

However, when he gains a Guardian System, though it is older and vastly underpowered (like all the Guardians in the proxy war), it seems to have a great ability to shield himself from powerful attacks. Though never explained completely, it eventually becomes clear that his Janken ability is something a little more than it seems. He always wins because he has an innate ability to intuitively guess what his opponent is about to do, so in battles, he instinctively switches the settings on his guardian to what is appropriate according to who he is facing. The more times he faces-off against a particular opponent, the better he becomes at anticipating what their next move will be.

He also learns early on that space-faring races are practically incapacitated by the sound of fingernails on a blackboard (which sounds like a ship's hull breaking) and replicates the sound as a sonic weapon.

His main opponents are the four girls who represent the galaxy's four most powerful space pirate guilds, Dird Shank, Alea Balta, Palty Jurai, and Apuesta Daluma. He becomes as close as family to them (one that wouldn't send him away at their first convenience) and their young and flirty genius school teacher, Miron Pham.

In his first week, he is gifted two baby chicks, named Pi and Piyo, that are carried around in a small incubator until they grow large enough to survive outside. In the OVA, it is shown that they eventually get their own body enhancements, becoming odd, but effective, weapons in their own right.

He is actually victorious and becomes the owner of Banjo Island and the ship at its core. His win makes Earth the capital of the new pirate federation and is named a governmental representative of the pirate nation. His duty now seems to be the captain of the ship and protector of Earth and its interests. Miron later joins him as representative of Earth itself.

After the pirates and forces on Earth have been quelled and Banjo Island is safe to be left alone with lesser reinforcements, Shou is meant to be sent to Galaxy Police Academy for formal training. Shou is also given a much more advanced Guardian. 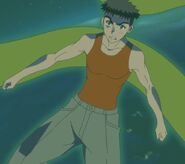 Add a photo to this gallery
Retrieved from "https://tenchi.fandom.com/wiki/Shou_Kukoma?oldid=24130"
Community content is available under CC-BY-SA unless otherwise noted.