In the film, a mysterious girl named Mayuka suddenly appears at the Masaki household, claiming that Tenchi is her father. While the Masaki family struggle with Mayuka's origins and Ryoko's mistrust of her, it is revealed that she is a creation of the demon child Yuzuha, who seeks revenge against Juraians after how they treated her long ago.

On planet Jurai, the people celebrate a holiday called "Startica". There, a girl tries giving a gift to a young Yosho, but guards suddenly attack them and reveal her true form as a demon, forcing her to flee.

This demon girl wakes up from a bad dream and uses a screen to view the inside of the Masaki residence enjoying Christmas Eve. Without him noticing, she takes a strand of Tenchi's hair and puts it into a giant vat along with her own hair.

It's now a hot summer day for the Masaki household, and Tenchi has gone out to clean the nearby tombstones. On his way back, he suddenly meets a mysterious, blue-haired girl who immediately calls him "papa". He takes her back to the house, where the girl, named Mayuka, continues calling him her father to everyone's bewilderment. Ryoko isn't having any of it, and she tries intimidating Mayuka with her sword to get her to tell the "truth". Mayuka turns out to have incredible power, and she summons a Light Hawk Sword, but Yosho carefully subdues her before she kills anyone. Washu, curious about Mayuka's abilities, steals a strand of her hair to analyze in her lab.

Lunch goes about as well as expected, as Ryoko remains antagonistic toward Mayuka. Tenchi excuses himself to take a bath, and Ryoko and Ayeka have to restrain Mayuka from going with him. Outside all of the girls ask Mayuka about herself, but Mayuka says she doesn't know anything apart from Tenchi being her father. Washu comes outside and confirms to them that Mayuka is Tenchi's daughter since her DNA matches his and that the space-time continuum was disrupted the moment she arrived.

While the girls speculate who Mayuka's mother is, she sneaks off to visit Tenchi in the bath, which causes him to turn red with embarrassment. Ryoko catches up and furiously chases them around until Yosho puts a towel around Mayuka.

The demon girl is annoyed that Yosho keeps interfering with the "fun", she then recollects a time when she killed three people and swallowed the gems inside them, only for Yosho to greet her right afterward and give her a charm for the upcoming Startica holiday.

Seeking answers as to who Mayuka's mother is, Washu collects a silver strand of Mayuka's hair that fell off when Mihoshi combed her. Mayuka attempts to visit Tenchi in his room, but Ryoko and Ayeka claim he's not feeling well and keep her away. She then makes origami with Sasami and Mihoshi when she shows them a box that displays a holographic projection of a Startica tree—Startica being the Juraian summer festival and a combination of Tanabata and Christmas. Later that afternoon, Tenchi leaves his room after everyone falls asleep and goes to work outside, but Mayuka's box activates and the demon wakes up Mayuka to go after Tenchi.

Mayuka grabs Tenchi and takes him halfway up the steps of the Masaki Shrine. Tenchi asks what she's doing, and Mayuka suddenly says she loves him and kisses him on the lips. A green light envelops both of them, seemingly ready to transport them somewhere, but it's interrupted by Ryoko—who had woken up and found them outside—yelling out Tenchi's name.

Ryoko grabs Mayuka and flies them both high into the air. Ryoko demands that Mayuka tell her where she was trying to take Tenchi, but Mayuka professes her innocence and rebuffs Ryoko's claim of her lying. Ryoko drops her, saying she never trusted her from the beginning.

That evening, Kiyone and Mihoshi unsuccessfully look for Mayuka, and Ryoko claims she doesn't know what happened to her. Meanwhile, Mayuka wakes up on a cedar tree branch and cries out for help, and Katsuhito finds her and brings her back to the Masaki residence. There, she and Ryoko immediately get into a physical fight over what happened, with Tenchi in the middle trying to keep them separate. Ryoko desperately tries telling Tenchi that Mayuka is manipulating him, but Tenchi, to everyone's shock, slaps Ryoko across the face. He says that while he doesn't know anything about Mayuka, he's willing to accept her because Ryoko and the other girls came here just like she did. Ryoko apologizes for her actions and disappears.

Washu's fruitless attempt to identify Mayuka's mother is interrupted by Yosho, who enters her lab bringing much-needed food. She mentions to him that the space-time continuum was disrupted a second time today at the steps of the Masaki Shrine, and Yosho says that this was what he wanted to talk about with her.

Ayeka finds Ryoko sulking next to the Royal Tree Funaho. She confides to her that she feels jealous of Mayuka and doesn't feel mature enough to face Tenchi if he were to fall in love with another woman, preferring to just return to Jurai without saying a word. Ryoko tells her not to worry about that since Tenchi isn't that kind of person. Sasami catches up with her sister without seeing Ryoko and brings her to watch the others light fireworks.

As the demon girl watches everyone light fireworks, she again remembers the moment she attempted to present a gift to Yosho, and angrily orders Mayuka to "burn them all". Mayuka suddenly lights a bunch of fireworks at once, but nobody is hurt. However, she suddenly has a huge headache and is brought to bed with the others. There, Mayuka apologizes for what she did and admits that she's afraid of herself. After Mayuka asks about Christmas, Sasami shows her a photo album from last year's Christmas celebration. Mayuka is excited and wants to celebrate Christmas, and the girls accept her as part of their family.

Tenchi finds Ryoko sitting on the roof of the house. He apologizes for hitting her, but Ryoko is still distrustful of Mayuka and worries for Tenchi's safety. He puts a comforting arm around her and asks her to get some rest.

Mayuka's box activates again and the demon girl wakes her up, ordering her to bring Tenchi to her, or else she will destroy her. Mayuka goes to Tenchi's room. Under the demon's influence, Mayuka attempts to teleport her and the sleeping Tenchi again, but they're interrupted by Ryoko and Katsuhito barging into the room. Katsuhito sees the demon and realizes who is controlling Mayuka, but Mayuka—unsure of what's happening and frustrated with Ryoko's questioning—runs away.

While Mihoshi and Kiyone go out to find Mayuka, Katsuhito explains that she's being controlled by a creature named Yuzuha, who has dwelled in the dark domain since ancient times. Sasami runs off to find Mayuka herself, with Ayeka and Tenchi not far behind. She finds Mayuka in a clearing in the forest, where Yuzuha has "hollowed" her out in retaliation for gaining intelligence and disobeying her orders. Mayuka grabs Sasami and teleports both of them to Yuzuha's world, and Yuzuha shoots a blast of energy and injures Ayeka when she tries to intervene.

Washu opens a dimensional portal to Yuzuha's world, which Tenchi and Ryoko plan to enter to rescue Sasami, though Katsuhito warns that Jurai's energy may not reach there. They enter, and after fending off an attack by toys, fall through a hole and are met by a tied-up Sasami and Mayuka, who immediately attack them, and Tenchi finds he can't use his Jurai power. Yuzuha introduces herself and begins her "Christmas Party" and also attacks them with toys and decorations, knocking Ryoko unconscious by the time they fall into a vat inside of a library room.

Tenchi offers himself to Yuzuha in exchange for letting Ryoko and Sasami leave, and Mayuka attacks him with claws. Sasami wakes up and desperately talks with Mayuka, managing to remind her that Tenchi is her father. Yuzuha furiously attacks Mayuka again for not obeying her, but Mayuka attacks Yuzuha and says she wants to celebrate Christmas, not Startica, with Tenchi and everyone else. Yuzuha attacks her again, this time fatally, and Mayuka apologizes for all the trouble she's caused before she fades away with nothing left but a red gem.

Tenchi tells Yuzuha that by killing Mayuka, she had killed her own half, but Yuzuha morphs into a monstrous form and captures Tenchi, Ryoko, and Sasami. Just then, however, Ayeka, who had gone to the Royal Tree Funaho earlier, teleports to Yuzuha's world and throws Tenchi a sapling of Funaho, allowing him to use his Light Hawk Sword. Tenchi destroys Yuzuha and her world with a single strike, but also catches a glimpse of her memories with Yosho on Jurai.

Tenchi wakes up back home, but everyone laments that Mayuka is gone. Washu takes Mayuka's gem that Tenchi has and offers to restore Mayuka to life, but if everyone agrees to it. Thankfully, the only possible holdout, Ryoko, agrees to bring back Mayuka, if only to "set her straight".

The end credits roll as a set of still images depict Washu rebirthing Mayuka as an infant, and everyone organizing a summer Christmas to celebrate her return.

This movie is part of the Hasegawa Universe. It appears to take place prior to volume 12 of Hasegawa-sensei's light novels. This is why it appears to contain elements from both the Tenchi Muyo! Ryo-Ohki OVA and Tenchi Universe TV series. Many things come from the OVA, such as the floating hot spring and the new house design, but small differences like the different costumes, the easy application of the Light Hawk wings as a sword weapon, and the inclusion of Kiyone Makibi seem to borrow from some Universe elements.

The film was originally released in Japan on August 2, 1997 as a double feature along with Slayers Great. The film was later released in North America on August 8, 1998 as a DVD by Pioneer Entertainment (later Geneon). In 2010, FUNimation Entertainment rescued the North American license of the film, along with the previous two Tenchi films, and has distributed all three in a Blu-ray/DVD combo pack. 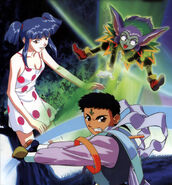 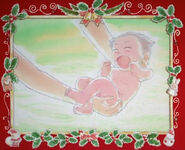 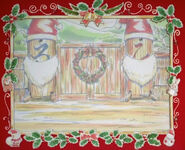 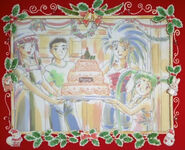 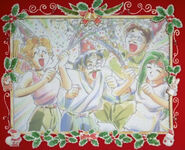 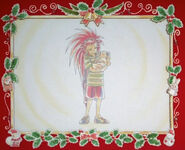 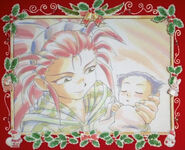 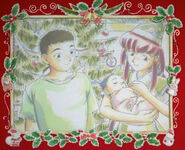 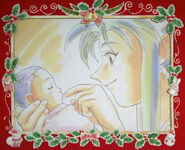 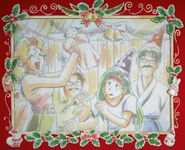 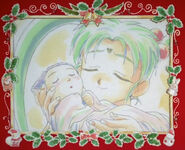 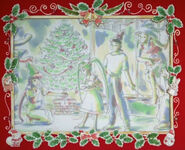 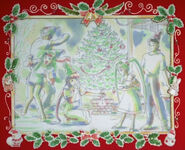 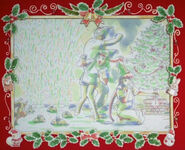 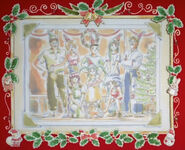 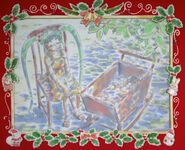 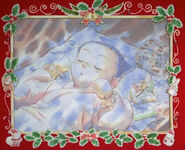 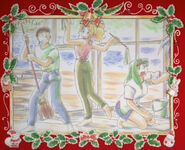 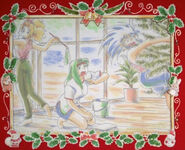 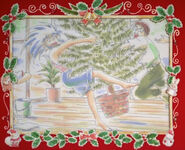 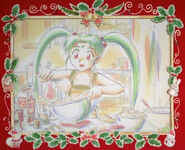 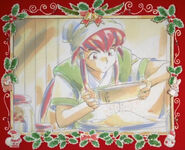 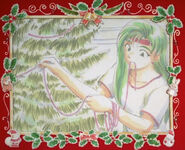 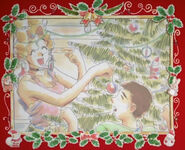 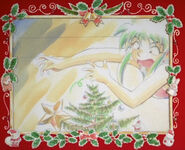 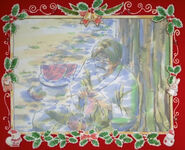 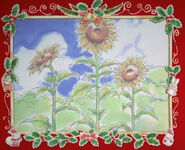 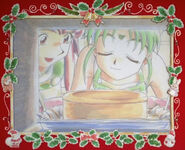 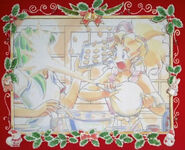