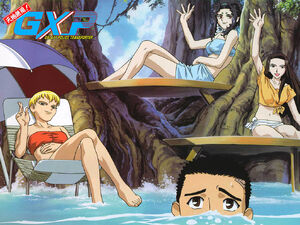 Tenchi Muyo GXP follows Seina Yamada, a teenage boy living in rural Okayama and a friend of Tenchi Masaki who inadvertently joins the Galaxy Police due to both his penchant for bad luck and being forced to by his family. Soon, Seina becomes the captain of his own Galaxy Police ship, the Kamidake, and is accompanied by four women as crewmates: Amane Kaunaq, a former supermodel and the woman who recruited Seina; Kiriko Masaki, Seina's childhood friend who lives a double-life working for the Galaxy Police, Ryoko Balta, a space pirate of the Daluma Guild and named after the infamous Ryoko Hakubi; and Neju Na Melmas, an exceptionally powerful telepath despite her childish appearance. Unfortunately for Seina, all four women fall in love with him in the process.

Tenchi Muyo! GXP was originally broadcast in Japan during 2002, where all 26 episodes were initially aired from April 3 to September 25. The episodes were also slightly edited for airing on Japanese TV with some changes in content for the DVD releases.

The English version of GXP has aired on the FUNimation Channel with other anime licensed by FUNimation Entertainment. The airings began in 2006 until the final airing on June 15, 2008.

Retrieved from "https://tenchi.fandom.com/wiki/Tenchi_Muyo!_GXP?oldid=21094"
Community content is available under CC-BY-SA unless otherwise noted.