Tenchi Muyo! War on Geminar, known in Japan as Isekai no Seikishi Monogatari (異世界の聖機師物語, "The Tale of the Sacred Mechamaster from Another World") is a 13-episode OVA series directed by Koji Yoshikawa, created by Masaki Kajishima, and produced by AIC and BeSTACK. It is a spinoff of Tenchi Muyo! Ryo-Ohki and only features cameos of the original characters.

Kenshi Masaki, a 15-year-old boy and the half-brother of Tenchi Masaki, unwillingly traveled from his homeland on Earth to the alternate world of Geminar. In Geminar, the countries usually wage wars against each other by using Seikijin, or "Sacred Mechanoid", humanoid weapons that were originally discovered within ancient ruins. After being deceived by a mysterious group to participate in an attempt to assassinate Lashara Earth XXVIII, the young princess of the Shtrayu Empire, he ends up captured after he is reluctant to kill her when he had the chance. Afterwards, Lashara and her servants confer about his situation, and they decide to give him aid.

Disguised as Lashara's servant, Kenshi moves with her to the "Holy Land", a virtually impregnable fortress that serves as an academy to train Seikijin pilots, known as Seikishi, selected from around the world. With his kindness, tenacity and being gifted in a wide range of skills that vary from cooking and cleaning to advanced techniques of survival and combat, not including some talent to usually get himself in trouble (like his um... massage), Kenshi eventually becomes a celebrity of sorts in the academy, becoming the object of affection of many female students and making some of the male students envious of him. However, the same faction that deceived Kenshi is secretly working behind the shadows inside the academy, and a wide scale conflict which will engulf the entire world of Geminar in war.

Funimation licensed the series in 2012 under the title Tenchi Muyo! War on Geminar. 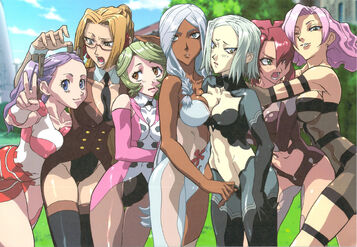