Z (ゼット) (real name: Z-0001332536893) is the principal antagonist of the third season of Tenchi Muyo! Ryo-Ohki. Z seeks to kill Tenchi Masaki to become the greater power in the universe and reunite with his lost family through attaining the power to undo the Choushin's work.

His first on-screen appearance (albeit in silhouette only) was in the final minutes of the second OVA series's episode, Zero Ryoko and briefly in Here Comes Jurai!, Part 2. He later appeared in the third OVA series.

Z-0001332536893 was originally an expert space fighter pilot. He, his family, and many other members of his people, found and over-zealously attempted to attack the "temple" where the three Choushin goddesses resided. This attack was likely set up by Tokimi for her sisters' experiments to look for potential of a much greater power in the universe—their main modus operandi. Tokimi's original experiment was to look for the potential by inducing chaos within harmony for the arrival of the potential as the balancer.

During the space invasion against the temple guardians, the space battleship cruiser containing the family of Z-0001332536893 was destroyed and he was injured severely. Watching his last family member die induced his insanity and unleashed his untapped Light Hawk Wings for the first time. He used his awakened power to destroy the enemy fleet. Z-0001332536893 physically changed with his awakening, resulting his head having a purple sclera with matching marking on the of side of his eye. Because Z-0001332536893 a humanoid sapient was able to generate the Light Hawk Wings, the manifestation of energy from a higher dimension, Tokimi noticed this and took him into her grasp while he was helpless and screaming. Afterwards, Z-0001332536893 as Z became Tokimi's warrior and her guarded as a possible potential.

Serving Tokimi, Z takes on the role of the battle machines that he and his people had fought and lost to in their invasion. With his five Light Hawk Wings, he is easily able to overcome other races who send war fleets to attack the "temple." Again, this is done so the disharmony could induce another possible potential. Z also wanted to prevent any other possible potential to be born from the experiments, thereby cementing Z's chance to become the true potential (kami) and bring back his family unhindered by the Choushin, while preventing the possible potentials from suffering under the Choushin's, notably Tokimi's, experiments.

During a meeting with Tokimi and the Dimensional Supervisor D3, he notes that Dr. Clay has discovered the third dimension location of her older sisters Washu and Tsunami. It is here that the events of episode 12 where Tenchi Masaki uses his own Light Hawk Wings to overcome a dark hole, are noticed, as is the uniqueness of Tenchi's power. Knowing that Z would likely challenge Tenchi, Tokimi orders him to not touch him. This is re-enforced with a warning from D3.

Z decides to 'obey' the letter of the order, but not the spirit of it. He first tampers with a communication from Galaxy Police Officer Mihoshi to her family, setting in motion a chain of deadly events that make up much of the story of the third OVA series. Using Noike as a subconscious passive observer around Tenchi, Z observed his plan's progress.

When his attempt to manipulate Mihoshi's brother Misao Kuramitsu into killing Tenchi fails, Z directly attacks Tenchi in an attempt to eliminate him. Z was blinded by hatred and anger at what Tokimi (and indirectly Tsunami and Washu) had done to him, and was jealous of Tokimi's clear interest in Tenchi; in his warped mind, he's doing Tenchi a grateful service, since he knows that Tsunami and Washu will bring him back to life, only he will no longer be a potential with Light Hawk Wings, leaving Z as the only potential for higher power left, with self-believing that because of what Tokimi took from him for the Choushin's experiments, he deserved to be a higher being than the Choushin.

In the process, Z destroys much of the Earth and when testing Tenchi's material conversion abilities, destroys a large section of the moon. Since Tenchi only displayed three Light Hawk Wings, Z canceled them with three of his own, leaving him with two and Tenchi with none. He attempts to kill Tenchi, but Tenchi manages to flee to Saturn. To stop Tenchi, Z has pulled from the future, the entity known as the Counteractor who also happens to be Empress Misaki Masaki Jurai. Seeing this, Tokimi finally made a direct attempt to stop Z.

However, Z overcame her efforts with the help of the Counteractor at great cost to himself. He attempts to again kill Tenchi which causes Sasami to become Tsunami. Tsunami and Tokimi strike simultaneously, with the former trying to save Tenchi, causing a good sum of the galaxy to be destroyed. Washu, who had resumed her Choushin form, put an end to it and focused her sisters' attention. Z explains things to Tenchi, including the story of Z's past. Space pirate Ryoko then attacks Z in her spaceship Ryo-Ohki to save Tenchi, and, though Z is injured because she is Washu's daughter, he is able to destroy Ryo-Ohki.

To prevent Ryoko from being killed, Tenchi overcomes the Counteractor and places himself between Z's Light Hawk Wings and Ryoko. Tenchi is sliced open by Z's Wings, however, instead of dying, a huge burst of energy emerged from the wound. Z was easily destroyed by this surge of Tenchi's power. Later, when the Choushin explained what had happened, Tokimi realized that had she done things differently with Z, she might have had a relationship with him that was similar to the one Tsunami and Washu have with Tenchi. She then recreated Z as an infant and sent him to the place and time he would be most happy. The Choushin cannot re-create the power he once had, and Tokimi wishes that they will cross paths in the future.

Because Tokimi sought to send Z-0001332536893 to the when and where he desired the most (family) and rewind the timeline to one point that Z-0001332536893 did not exist in the third dimension, an alternate timeline was created as a result. However, both Tenchi's awakened kami powers (restrained) and his harem were spared from the time alteration, with Tenchi personally and easily defending the Earth from Chobimaru's attack. Resolving the previous timeline's change and with a unknown time traveling Noike+Fuku interference, they cemented the arrival of the Tenchi Muyo! GXP (Seina) timeline. Tokimi was also influenced by Z-0001332536893's existence and decided to stay in a power-limited form (Chibi-Tokimi) at the Masaki Shrine to enjoy the universe that the Choushin created and for her untold mission.

The GXP novels specifically state that Tokimi resurrected Z to live with his parents, in a timeline where they never attacked her temple.

High Dimensional Power: Z was a being of extremely great power. Like Tenchi, he can also produce Light Hawk Wings, five of them to Tenchi's three. He is even capable of punching holes through planets seemingly without effort and can destroy large, powerful star fleets. He was able to effortlessly stop Ryo-Ohki's space ship form with only a single arm, and overpowered the ship. However, Z's strength would never have equalled Tenchi's. While he commands two more Light Hawk Wings than Tenchi, Z does not possess Tenchi's ability of Material Conversion (which allows pure energy to be converted into solid matter, and vice-versa). Z was ultimately not the higher power that the Choushin were looking for. However, with his great experience, he was able to bypass many of the Galaxy Police security and secretly manipulate a plan process to kill Tenchi. Z could also retrieve from a possible future timeline the Counteractor existence that could rebound the Choushin's powers for his plan to directly kill Tenchi.

Expert Space Pilot: Prior to being discovered by Tokimi as a someone who can produce Light Hawk Wings (3). Z was born to a high interstellar civilization that sought to invade the Choushin's "temple". With his piloting ability, Z was able to enter the deep defense of the "temple" of Tokimi's and barely survive 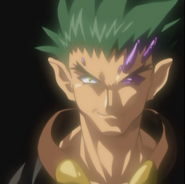